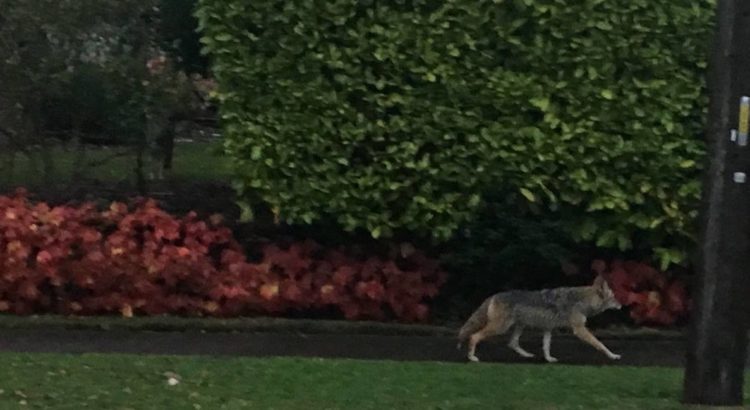 There very well may be two drunk coyotes walking around Ballard today.

Heather, a member of the My Ballard Facebook Group, wrote the following message to neighbors:

“My Canadian guests left me with several half-full growlers of local craft beers which I used around the yard to make slug/snail traps. The first morning after putting them out I saw they were all empty and refilled them. This morning I looked out the window to find two coyotes going from one beer dish to the next…. so we may have some drunk coyotes staggering about.”

Chris Anderson, King County’s District Wildlife Biologist, says that while it’s the first time he’s heard of a drunk coyote, it doesn’t surprise him too much.

“Dogs can get drunk, so yes, coyotes can also get drunk,” Anderson said, adding that it’s unlikely to really harm them, but could cause different behavior. “An intoxicated animal has the propensity to be less averse to humans, and let their guard down, ” he said, adding that it could potentially cause them to be more aggressive.

“Coyotes will eat anything they can get their mitts on,” he said, and stressed the importance of deterring coyotes as much as possible.

Coyotes will always be around, he said, but the important thing is to keep them from becoming habituated. “Exclude, exclude, exclude — even haze them. When you see them, encourage them to keep going. Throw something at them. If you have a noise-maker, use it. Studies show that that effort and education is the ultimate answer to manage them.”

For more information on how to interact with coyotes in residential areas, visit the Washington Department of Fish and Wildlife’s Living with Wildlife website about coyotes.

“Coyotes will always be around, he said, but the important thing is to keep them from becoming habituated. “Exclude, exclude, exclude — even haze them. When you see them, encourage them to keep going. Throw something at them. If you have a noise-maker, use it. Studies show that that effort and education is the ultimate answer to manage them.”

Huh. I wonder if this applies to people like junkie thieves and drifter ingrates.

It doesn’t seem to have worked on you.

Hey you’re welcome for the free college and food for your kids!
And if not for you, then for the folks you want me to pay for.

I don’t think you understand how democracy works. I also doubt that anyone who spends all day trolling a community blog is paying enough in taxes to provide for the services they themselves use let alone for anything else.

Drug induced zombies that use 911 like room service put NOTHING back into the community kettle. I’d take a look at our city’s 911 reds-out online and then talk smack. Then U 2 will see how this works. You should be more concerned about YOUR property taxes or rents climbing due to our “leaders” and what they allow to happen right in our faces, every effing day. And we don’t live in a democracy, rather a representative republic. I keep my cats in because of the coyotes.

@Paintking
It doesn’t occur to people like Freja that the police or EMT they might need are tied up on some daily junkie drama instead of rushing to the aid of TAXPAYING WORKERS. Love one suffer a heart attack or accident? Oops too bad sorry they got there 10min too late because some loser junkie OD’d for the 4th time this week.

Huh, so Freja I’m assuming you must respect our ELECTED PRESIDENT TRUMP since you love democracy so much, yes?

I can do this all day. See what’s happening in France. The liberal insanity is out of hand, Children. Yeah, nobody WORKS FROM THEIR COMPUTER ALL DAY therefore I must not “have a job”. Pathetic.

Oh look, lil Bucky the troll got triggered again. And all over coyotes.

So, in your perfect world, people would be ignorant and children would starve? That doesn’t sound very fun.

Look around. Do people in USA look skinny to you?
You must not have seen real starving people up close and personal. We don’t have many in this country, and certainly not in Seattle.

Who are you paying for and why do you hold yourself so high above others? Arrogant.

This city can’t hire a gazillion people and make $$ off of coyotes as they do heroin addicts/junkies. Without that chaos, WTF would they have to do or whom to tax?

Oh, I see what you did there, you compared homeless people to animals. That’s hilarious bro.

That is some serious amateur trolling. You should go upstairs and show your mommy and daddy what you did, maybe they will be impressed

“Oh, I see what you did there, you compared homeless people to animals. That’s hilarious bro”

Lib SJWs: humans are animals, there is no god! Muh evolution! Humans are cancer on the planet!
Also Libs: how dare you compare people to animals! Muh outrage!

Oh no, lil Bucky was triggered again! You’re far to easy to trigger and such an amateur.

You still don’t understand what that means.

Huh. I wonder if this applies to people like junkie thieves and drifter ingrates.

Even on an article about coyotes, you can’t help but shout to the world about your strange homeless fetish. Nice work Harley Lever!

No one knows who that is.

So apparently he’s some guy that ran for city council a few years ago. Why do you bring his name up?

Harley Lever’s MO is to hijack discourse to yell very loudly and irrelevantly about how there’s a homeless problem and how much he hates Seattle.

“Uncle Buck” fits that profile to a T, so it’s safe to assume he’s Mr. Lever.

Top of the morning to you, Truth and by that logic you must be Nikkita Oliver!

Hey, Uncle Dumbass. The article is about coyotes and beer. Stick to commenting directly on the content of the article. Oh, snap. You’re going to retort with some madly captivating bloviating about “libs,” aren’t you? Last I checked, which was never but I place a bet on the accuracy of my assumption, neither coyotes nor beer hold political views. But hey, you’re here to be entertained, aren’t you? Or do you think you’re entertaining? Either which way, you realize you’re not changing hearts and minds, right? You’re just spewing vile for the sake of I don’t know – your ego? Sad, sad little person.