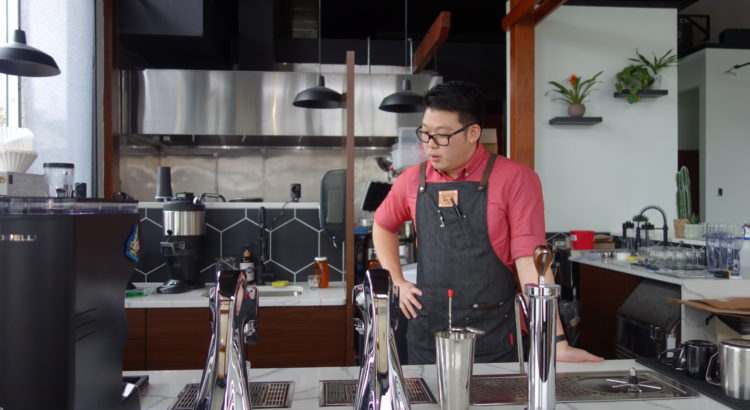 At Watson’s Counter on the corner of 15th and 62nd, James Lim is reimagining Korean-American food.

Lim, born and raised in Seattle, wanted a departure from working in specialty coffee, and last year embarked on developing a restaurant concept with his friend and chef, Scott Lukehart.

Previously, Lim was managing a large staff for a Seattle coffee company and was often working 12- to 14-hour days. “I thought, if I’m going to invest this much time to improve products and keeping staff morale, I might as well create my own environment,” Lim said.

“It was right place, right time,” he said. 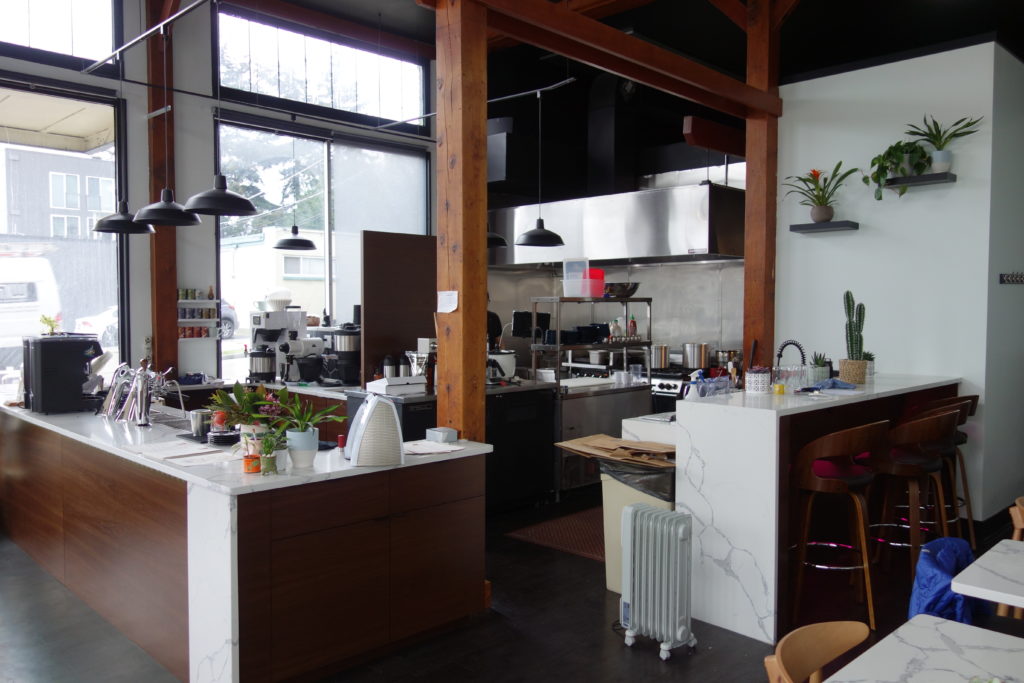 Watson’s Counter is a blend of Lim’s passions in life: good coffee and authentic, home-cooked food. And, of course, his dog — the restaurant is named for Lim’s Maltese-Yorkie mix, Watson.

Everything on the menu is made from scratch, from the Korean Eggs Benny, served with a thick slab of gochujang marinated pork, to the Loco Moco (pictured below), a plate of fresh-ground house-blend chuck, short-rib and pork belly served with rice and fried egg on top, and Chicken Wings, served with the Korean gochujang made in-house. 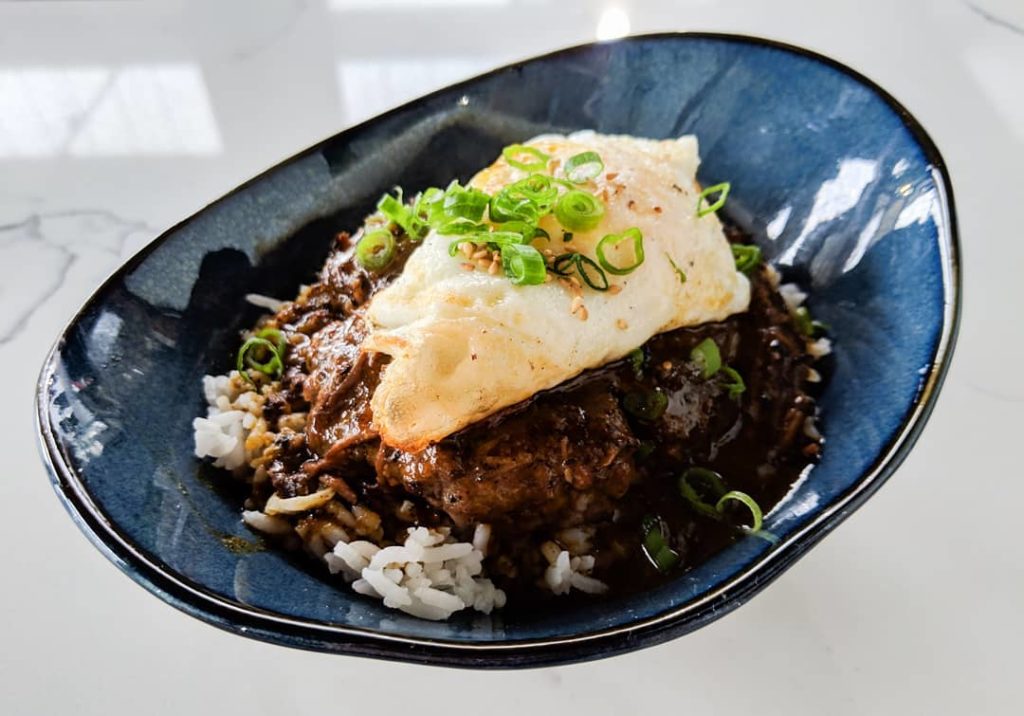 Breakfast options are served all day, which along with the Eggs Benny includes a Cereal French Toast (Macrina’s whole wheat cider bread with a cereal crust) and Japanese-inspired Cold Soba Noodles, served with Korean peppers and grated radish (vegan, unless you add a poached egg).

Side dishes (banchan) include items such as house-made kimchi, Korean peppers with gochujang blend for dipping, and pickled vegetables. 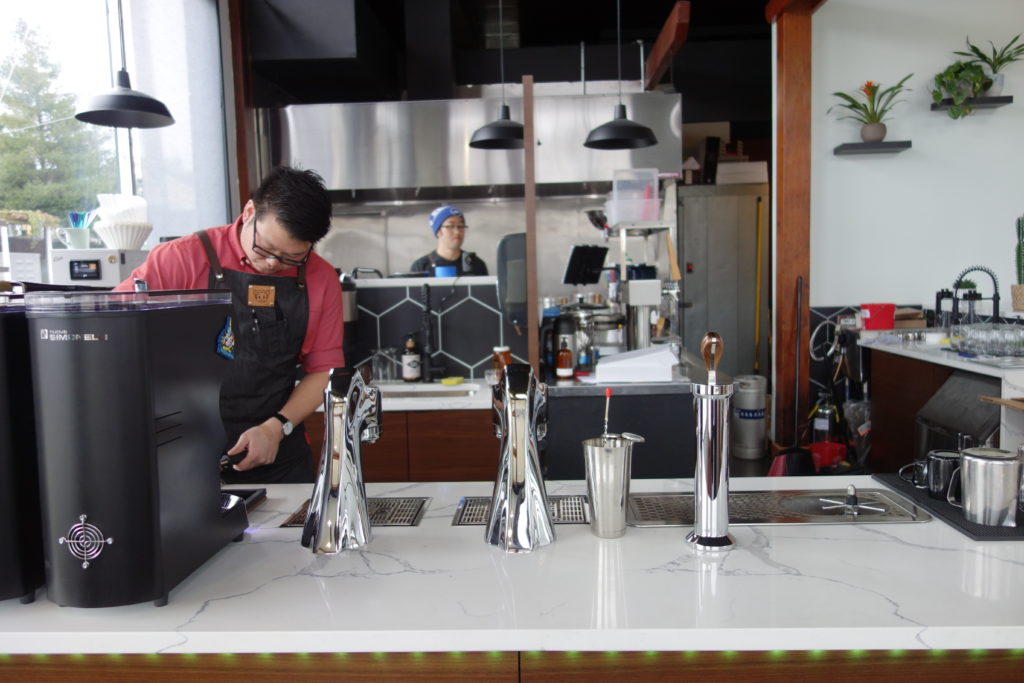 “For us, it was incorporating our favorite things. Scott loves Loco Moco, so that was a mainstay on the menu. I’m a big fan of chicken wings, so that was an absolute must,” Lim said.  Everything is served family-style, which is how Korean food is meant to be eaten, Lim said.

Watson’s Counter doesn’t serve alcohol, but if you’re a coffee drinker, you’re in luck. Lim serves coffee from local roasters Anchorhead, and is a pro behind the espresso machine. He also has a number of house-made and locally sourced syrups such as Fauxnilla, Camano Island honey with lavender, and an orange and rosemary blend. They’ll also serve two kinds of Iggy’s kombucha on tap, and both a regular and nitro cold brew. 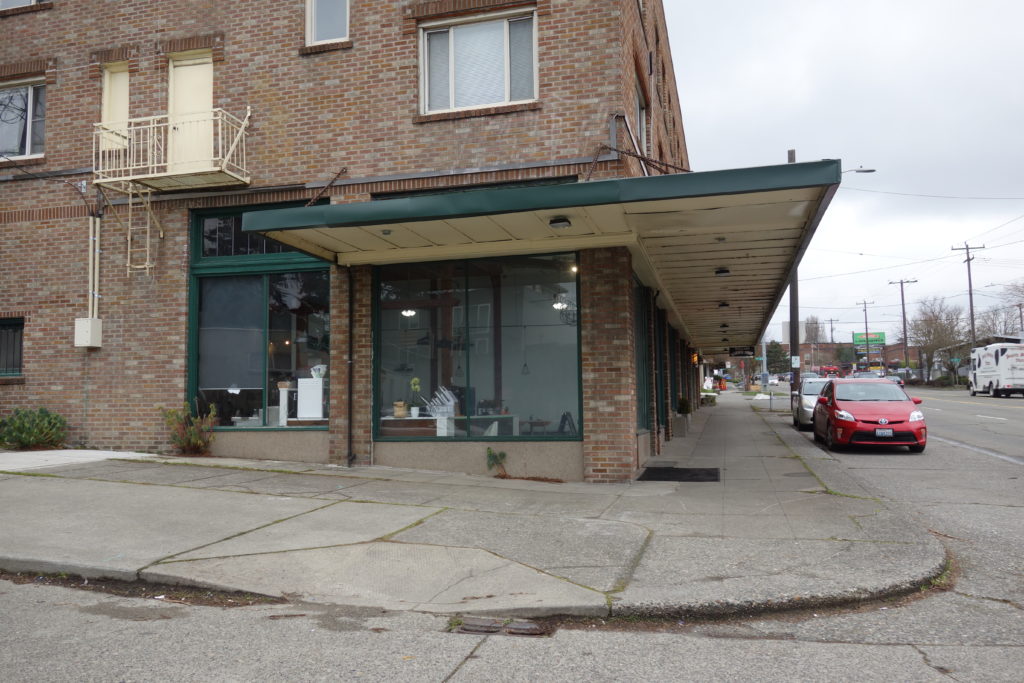 Watson’s Counter operates with a small team — just five total staff run the all-day restaurant. They open at 6:30am for coffee, and start serving food at 8am. The restaurant closes for two hours a day between 2pm and 4pm, for family meal and staff changeover, and then serve dinner from 4pm to 9pm. Lim adds that they don’t accept tips, which he says is because he doesn’t agree with obligatory-tip culture.

Right now, they’re gearing up for an official opening on Feb. 25, but will have a soft opening this Saturday, Feb. 23. Lim said the soft opening is by reservation only, and will cost $20 per person. They’ll be serving a pre-fixe sampler plate, with vegetarian options available on request. Reservations must be made by 6pm on Friday. Feb. 22. Once they open, they’ll be walk-in only.

To stay updated on their progress (and for some very cute photos of Watson’s mascot), follow them on Facebook.

Thanks Lauri for the tip!

Yet another American living out their dream. Although, doing it in Seattle is a bit of a challenge, with so many layers of BS; compliance, taxes, regulations. I can’t wait to give it a shot and help support these guys and their dream, and eat good food! Best of luck here.

Sounds great, I look forward to trying this soon.

Looks tasty but hyphenated identities, like hyphenated last names, are postmodern cancer.
I wish them all the best in this fiercely luxury communist city.

That’s just xenophobia and not surprising. Get back under your rock!

Please share with us your wonderful insight on why hyphenated last names are cancer.

Get back under your bridge you troll.