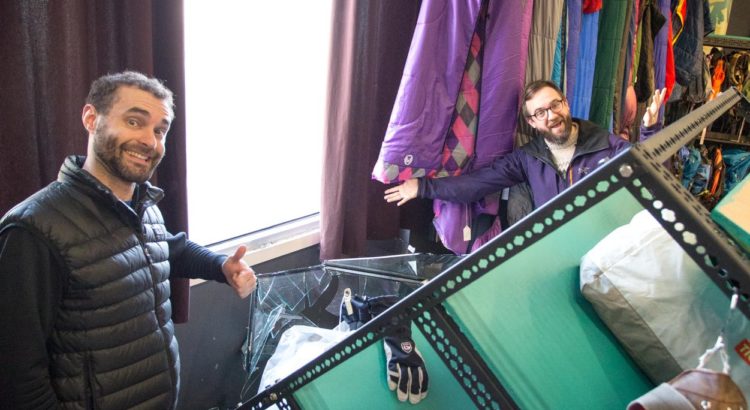 Ballard’s recently opened outdoor gear consignment store, Wonderland Gear Exchange, took a big hit over the weekend, when burglars knocked down a window and made off with several pieces of inventory.

Wonderland co-owner Ben Mawhinney says it happened sometime late Friday night or early Saturday morning. The burglars broke a large glass window to get in, and knocked over their tent rack in the process. Mawhinney says they’re still assessing the damage and what was stolen — they spent all of Saturday going through their inventory item-by-item. He says most of the stolen gear was soft goods like jackets and gloves. 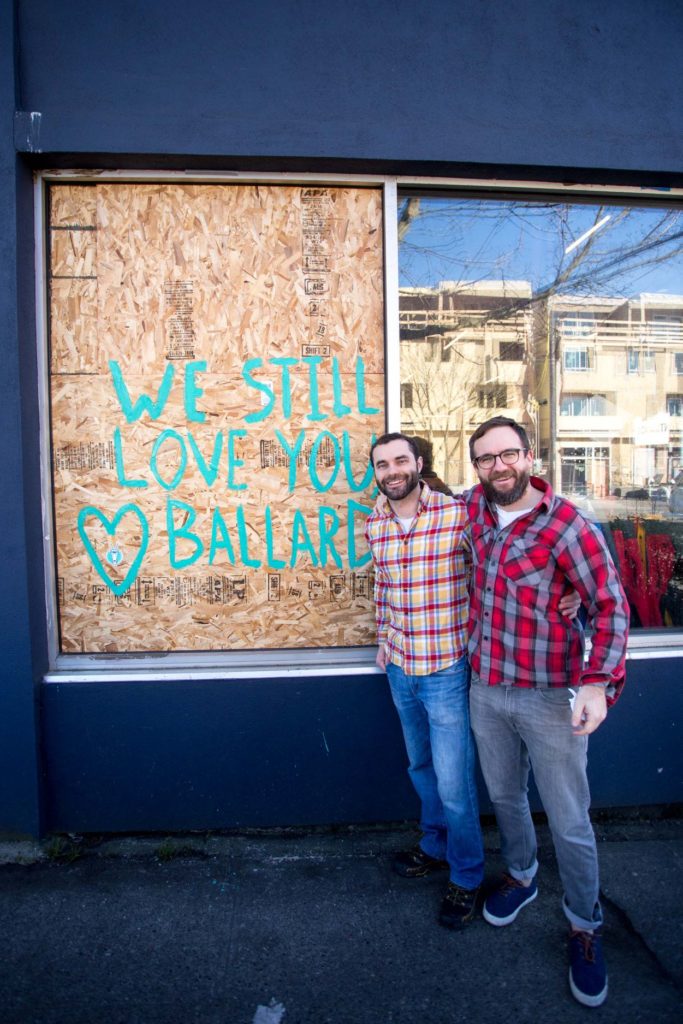 One of the items the burglars stole was a conspicuous giant yellow expedition parka made by Feathered Friends. “It would be impossible for someone not to stick out wearing it,” Mawhinney says.

“All in all, we are so lucky that the neighborhood has embraced our shop this quickly. These types of incidents certainly sting, but we’ve already felt a lot of support from the community since sharing the news of the break-in, and we recognize just how fortunate we are as a new business to have built some solid momentum in just a few months since our Grand Opening.”

Mawhinney says their security system failed to capture the burglary, which has since been remedied. If you have any information about the incident, contact Seattle Police, 206-625-5011.

Sorry, but surprised, especially after watching this report from KOMO 4 the impending death of Seattle.

Here is the video

So you will use POTUS as your scapegoat, again eh. What a POS you truly are. Perhaps you do this because your ashamed to admit the idiots you keep voting for/electing are responsible for the crap we all see on a daily basis. How many more heroin addicts and break ins will it take before you come around and figure shit out? Douche waffles and the people they vote for………………………..

look into the sinclair group. tell me i’m wrong after you’re educated on the matter. or don’t, and keep spewing your hate.

He’ll sing a different tune when it happens to him.

It’s funny how, when someone expresses a differing opinion, it’s immediately a ‘missive from trumpland’ worthy of your scorn. Talk about being unable to see both sides of the argument.

try again. komo was bought by sinclair, a media group buying local media stations across the country and forcing them to spew trump’s BS. i know you think i’m just making stuff up but do you research before you react.

‘Reaction’ is different than ‘Discussion’. What I’ve asked you to do is not immediately jump to a conclusion based on confirmation-bias evidence (Sinclair Group owns KOMO, Sinclair Group Bad, therefore KOMO Bad). Is some of it slanted to the right? Probably. But it leads me to believe your opinions are slanted to the left, and are influenced by more ‘left-leaning’ publications.
Your reaction, both to the original post, and to my reply to you, is the backfire effect in action. I listened to the piece. I don’t think all of it works in theory or in practice. However, I do believe that some of it does work, both in theory and in practice.
Does that make me a Trump-eter (hey, that’s funny!) Nope. It makes me open to hearing both sides of an argument. And given that our ‘crisis’ hasn’t been fixed yet, what’s wrong with hearing different ideas for solutions. You seem to be the only one parroting facts without offering alternatives.
Just saying KOMO is right-leaning? Doesn’t solve our homelessness issues.

Naysayers have been complaining that Seattle is dying since the Great Seattle Fire of 1889. Uncle Buck and KOMO are just the latest in a long line of handwringers to claim so.

I think most rational people would see this as something of an exaggeration. I hardly think Seattle is dying. Seattle has been in a state of flux for a couple decades now, and change doesn’t come without growing pains. That doesn’t mean we shouldn’t start looking for other solutions to our problems. I think you would agree our leaders haven’t exactly fixed anything so far.

I think most rational people would see this as something of an exaggeration. I hardly think Seattle is dying. Seattle has been in a state of flux for a couple decades now, and change doesn’t come without growing pains. That doesn’t mean we shouldn’t start looking for other solutions to our problems. I think you would agree our leaders haven’t exactly fixed anything so far. The thing is that we all know exactly what we have to do to solve the homeless problem: more housing for the homeless, treatment for mental issues and drug addiction and services to help integrate them back into society. That’s what every other first world country does successfully. Anything less is only a stopgap solution. The problem is, nobody can agree where these solutions should be located or how to pay for them, so the Council is too scared to move forward with anything, for fear of pissing off the vocal minority and the status quo remains. But for KOMO to say “Seattle is Dying”, even tongue in cheek as you suggest, is just downright pathetic. People are moving to Seattle at a record rate, despite the stated issues, real or not, in KOMO’s video,… Read more »

Actually, the left-leaning are, on average, the vocal minority. Maybe not in Seattle, but certainly in the US as a whole. So, if the ‘vocal minority’ – here in Seattle a ‘majority’ – can’t get anything done, then, yeah, sue me for thinking we need a different approach, because whatever they’re doing isn’t working.

do you have proof on how the left-leaning are a vocal minority? are you referring to the popular vote in the last US election? i think you need to take a cold hard look at facts and ease up a bit on Trump TV

WOW, that’s the best you’ve got, flugger? Calling out Trump again? Oh, you got me! I’m the POTUS in disguise, trolling a local blog site.
Personally, I think you need to stop drinking the kool-aid and learn to listen to viewpoints that might contradict your own. But I don’t expect you to be able to do that. Carry on!

Just look for a big old yellow junkie, I guess.

That’s sad, 2 guys trying to get a business off the ground and then this happens. Seattle at times is an awful place to live in and do business in and it seems like our politicians could care less.

Looks like you need a tax increase to check your privilege, Broham

hmmm, who would steal camping gear….? let me think about that for a minute.

likely someone who needs it badly enough.

Do you have any proof of that? I am currently in need of a tent, as I cannot go camping without one. Are you saying I, too, should be allowed to visit Wonderland Gear Exchange and steal a tent for my needs? I need it badly enough that I cannot go camping without it. Would that excuse my criminal activity – because I ‘need it?’
Just stop and re-read your statement. You’ve essentially said it’s ok for theft to occur – because you – and others like you – assume these are ‘our most vulnerable’ community members committing these crimes. What if it turns out to be some dumb kids looking to do mischief? Are you still going to say they needed the tent badly enough to destroy others’ property and peace of mind?

where did i say anyone was entitled to steal? where did i excuse ANY criminal activity? where did i say it’s “ok for theft to occur?” you are reading something entirely different than what i wrote. the question was asked who stole, i posed an answer. you are inserting some far reaching logic to think that i am excusing this in ANY way. GTFO with your putting words in my mouth.

grunion asked a question, i answered it. do i need to express sorrow for store owners in all comments? you are projecting big time here. did i break in and steal stuff? no. why do i need to express regret lol? i NEVER made any excuse, and if you pulled your head out of your own assumption you’d see you are fighting a losing battle. i know EXACTLY what i wrote, and you have a difficult time understanding it – not my problem. GTFO with not being able to understand basic logic, and continuing to put words in my mouth. you are full of lies.

sigh. you are too dense to understand basic english. and you get so upset you call me by an offensive name. you really are taking after lil bucky well.
once again, the question was asked who did this?
i gave an answer, and offered no opinion as to whether it should be allowed.
you took great offense, and started putting words in my mouth stating i was saying there was nothing wrong with people stealing these things and that it was justified. nowhere did i say that, and never have i felt it was right for them to steal. the fact remains however that they likely needed the supplies they stole. does necessity negate the wrongdoing? according to our legal system and nearly everyone i know, it does not.
stop putting words in my mouth, you dirty liar.

More likely, somebody who wants to convert it to cash to buy dope.

They are inherently discriminatory.
They say ‘look but don’t touch’.
How awful is that!
All goods and property should be free for the taking (especially those owned by fluffer and truth)