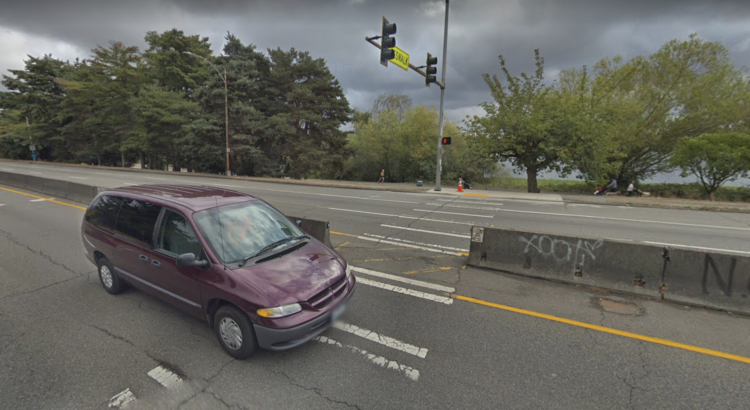 A man was arrested Monday morning after standing in the middle of the road and waving a knife at passing cars in Green Lake.

According to the SPD Blotter, police found the 48-year-old man at the 6800 block of Aurora Ave N after receiving 16 different reports of the man swinging a knife at vehicles.

When police arrived, the man tossed the knife in a nearby bush and briefly struggled against the police. He was taken into custody, and officers found a knife with a four-inch blade in the bushes, which was collected as evidence. The man was booked into King County Jail for unlawful use of a weapon.

Please tell us, SPD, what is the definition of a “lawful” use of a weapon? The city has done just about everything it can to inhibit would-be victims from defending themselves out of fear of some libtard lunatic prosecutor throwing them in prison for killing an attacker in self defense.

In any case, no matter what these lunatics and degenerates perpetrate – even when they’re arrested – they invariably commit some heinous act sooner or later after multiple court appearances. You li-ter-ally have a crazy addict waving a weapon around who will not be committed to a mental facility or do hard prison time, and who will be defended tooth-and-nail by some feminist or diversity lawyer who thinks people like this are victims instead of sociopaths/psychopaths with a high probability of committing assault/rape/homicide.

Wake up, Seattle, this city is wrong about almost everything.

C. Hag – So what is your suggestion for a solution to this situation?

Enforcing the laws, hard sentences for violent criminals – especially with prior offenses.
Aggressive policing of a ban on public drug use and camping. Background checks on all people who camp in urban public places. Immediate rescinding of the sanctuary city insanity which tacitly permits the flow of contraband into the state – this seems so obvious that typing it out makes me feel like I’m trying to explain the real world to children.

Encourage the training and ownership of firearms among women.
Move homeless services to areas near police stations and/or industrial areas.

These are a few of the the wild, insane ideas I have.

CH – I will agree with you that you have “wild, insane ideas” and I find them amusing. What I don’t find amusing is the way you belittle people on this forum. If you stopped doing that it might be fun to debate these issues with you. Please think about that.

Hey bucky, did you know that federal courts made it illegal for the city to aggressively ban public camping? That is, unless we provide enough housing for all of the homeless, which we are nowhere close. So are you suggesting we quickly build lots of housing?
Do you have any sources that provide evidence on your sanctuary city comment, or are you just inserting your own opinions with no facts to base them up?

MAYBE, instead of encouraging ownership of firearms, we should look at why people feel the need to have firearms in the first place. Perhaps try to fix the underlying problem INSTEAD of promoting ownership of devices that are built with the sole purpose of killing.

I’m sure he just needs a couple more hugs, a muffin (gluten-free, of course), and some fine, fine social justice to help him once again become a productive member of society.
Mental illness is sad and difficult to watch happen to a person, but we need to start being realistic about these things. Sometimes when brain chemistry is that corrupted, social ‘transformative’ justice isn’t going to help those people, because that’s not a fix for faulty brain wiring.

Should we roll back Reagan’s tax cuts on the wealthy? Those particular tax cuts caused massive cuts to our country’s mental health services.

We were told something would eventually trickle down and it sure did!

I think we should tax the wealthy the same way the rest of us are taxed – meaning, fairly.
I also think we should re-open mental institutions and commit people who obviously can’t be on their own. The problem with that is, of course, civil liberties lawyers would have a field day with ‘unwarranted illegal incarceration’ or something along those lines.
The country has changed in the 30+ years since Reagan, unfortunately. What once seemed OK now seems wrong to many – and probably many on this site would agree with that statement.
Go ahead, reopen all the mental facilities. See how many roadblocks are put in your way in regards to incarcerating (in an institution) people like our knife-wielding friend mentioned in this article.

The last few remaining mental facilities are extremely underfunded and understaffed, again mainly due to Reagan’s tax cuts. While that doesn’t excuse the atrocities that happen there, it sure does explain them.

I think we should tax the wealthy the same way the rest of us are taxed – meaning, fairly.

So when a vast majority of the GDP produced by Americans is now trickling upwards and staying there, what is “fairly”?

Well that’s the thing, we’d need to reopen the mental facilities if we want to start holding mentally ill people.

Then we need to roll back the Reagan tax cuts on the wealthy that caused them to close in the first place.

Unless you have an alternate solution?

We need more mental health support. There are a lot of people suffering from mental illness who, with proper services, can keep on track and live good lives without ever getting to a crisis point where they may be needing to be institutionalized. It is more cost effective to keep people in the community than institutionalized but they need to have access to functional services.

The wealth distribution in this country is obscene. Subsidizing the rich and corporations is ludicrous when those of us carrying them are going without.

Are you talking about the Wall Street coke heads that bankrupted Americans, pocketed the money and then had the gall to ask for a bailout?

Those are the tweakers that concern and affect me the most.

Fun fact: crazy bucky could actually get to the therapist if he was provided some mental health funding.

So he struggled against the police with a knife and wasn’t shot? That’s just wrong.

so this happened monday morning, huh? funny, no mention in the seattle times “local” or “crime” sections…

that mean dude is 1000% a vibrant member of the bum community.

The ‘narrative’ being pushed by the ST only allows a few crime stories a week that would cast a bad light on the policy failures of the city.

This is another example of how our brave police officers successfully handle potentially dangerous situations. Thank you SPD. Obviously this person has problems. Hopefully he can find some help.
FWIW, I have been confronted in a public place by a knife wielding individual and I can tell you that it is not a pleasant experience. Fortunately SPD came and subdued the guy and no one was hurt. I admire the people that choose to become law officers. It is not an easy job.

I understand not being a sadist, but did you think perhaps the next person this lunatic attacked wasn’t as lucky as you? I’m confused by the inability of lIberals to understand that people like this continue to act in the same manner until they are taken down or locked up. All this obsession with recycling but not a care about the next potential victim?

So, posit a solution please. You have so much to say about these topics but all you seem to do is post negative opinions and criticisms but never a real idea for a possible solution. Come on C.Hag, you can do better than this.

Here you can play the more games this mind blowing website https://helixjump2.com/helix-jump-2

somebody get the spam detector working!

“spam detector” on this site? It will never happen!

Why do we care about Green Lake news? It legitimately is not part of Ballard, unlike Crown Hill.