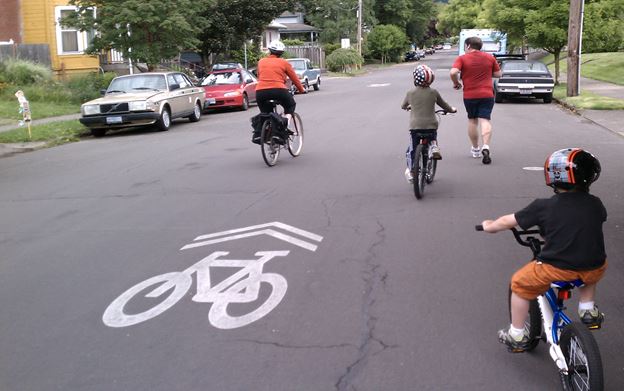 A project to develop a new neighborhood greenway is in the works, and the people proposing it are asking for community support to get it funded.

A number of local volunteers behind the new greenway project, which would be developed on 6th Ave NW between NW 43rd and NW 50th, connecting 43rd to the Burke-Gilman Trail. The project would include creating speed humps on 6th Ave, stop signs at east-west streets that intersect 6th Ave, and 20mph street signs.

The nonprofit has submitted the greenway project to the city’s Your Voice, Your Choice program for public approval. The program is a city initiative in which residents can democratically choose how the city should spend the allocated $2 million on park and street improvements.

The next step involves the community: public scoring will determine whether or not the project moves forward. To view and score the various projects, visit this website, which will narrow down some of the options for the voting phase. There are a number of Ballard projects proposed — the above link will list them in full.

The project scoring period will end May 31, with official voting happening in September.

Correction: An earlier version of this story incorrectly stated that Groundwell NW is behind the Greenway project. Rather, they are one of many supporters from the Ballard community.

This is my neighborhood. I have never seen anyone speeding on 6th ave, so speed humps are a pointless waste of money. They need speed humps on all of the east west streets like mine. NW 48th St. People speed down our street all day, everyday.

The point of the greenway is to protect the cyclists and pedestrians on 6th from the speeding cars traveling east/west through our neighborhood. Once 6th becomes the designated right of way, it could encourage people to speed along 6th, this the speed humps. The stop signs on 48th will be adjusted to stop east/west traffic, discouraging the current cut-through traffic speeding up and down our hills.

I also live in the neighborhood and am a bike commuter that uses 6th ave as my preferred route N-S in and out of the neighborhood. I am very excited about this project! I agree with Beaver that there is an E-W speeding problem, but I also agree with reiskar that this project will help calm traffic in all directions. In fact, I think people do speed on 6th ave, and there are often near-misses and accidents at intersections on 6th ave because folks are speeding N-S as well as E-W. These accidents would be mitigated by more E-W stop signs and N-S speed bumps. I encourage anyone with ideas about how to make this plan even better to vote this idea up on YVYC now and in September, and then write to the city when they do their traffic review to help them understand the issue even better!

Thank you for acknowledging the 6th Avenue NW Greenway Project in your May 8 article. Unfortunately, there were errors in the article that should be addressed so as not to mislead the public.

The 6th Avenue NW Greenway both was started and is being supported by a group of neighborhood volunteers, who are dedicated to making the project a success. Your article incorrectly reported that the idea was submitted by Groundswell NW, which is only a supporter of the project, with a $100 donation to help with material costs.

If we receive enough support, the idea will advance to the next phase, which is a final voting phase during the entire month of September. That phase will select the top 8-10 projects to move into planning and development.

Should we be successful, this portion of the greenway would be built in 2020. The long-term goal is an East Ballard greenway extending north, providing safe passage to neighborhood schools and parks up to Holman Road.