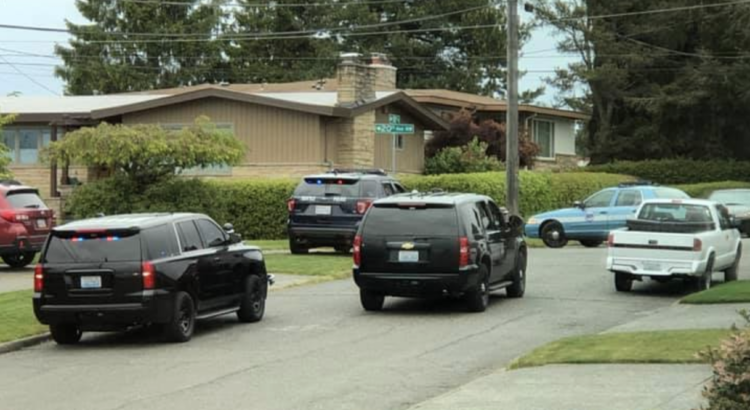 9am Thursday, May 16: Seattle Police say they still have officers searching for the suspect — we’ll update as soon as we learn more.

6:30 pm: Officers are now focused on Carkeek Park as they continue to search, according to the police scanner (thanks Silver!)

4:45 pm: Seattle Police just announced on Twitter that they’re winding down their search, but say officers will continue to be in the area as they investigate. They ask that if you see anything suspicious, you should call 911.

4:30 pm: Whitman Middle School has lifted their shelter in place — the police have cleared the school, but there’s still some police activity around the area, according to Seattle Public Schools.

4 pm: Judging from neighbor reports, officers have expanded their search to include parts of Blue Ridge and Loyal Heights, as well.

Meanwhile, the Seattle Times is reporting a new detail about the Greenwood shooting: “Police believe there was a fight involving a man and a woman, and the man was then shot in the head by a third person, Capt. Eric Sano said at the scene.”

While the woman remained at the scene to cooperate with officers, the third person fled the area.

3:30 pm: Police are conducting a search in Crown Hill for the Greenwood shooting suspect, and they’re asking people in the area of 1900 NW 89th St. to remain indoors. A police helicopter is hovering overhead, and officers are searching with K9s.

We’ve heard some reports from parents that Whitman Middle School was sheltering in place earlier today before kids were released.

(Photo of the search courtesy of John in the My Ballard Facebook Group).

Earlier: Police discovered a man with a single gunshot wound in the strip mall parking lot at the corner of N 125th St. and Greenwood Ave. just after noon today. He was taken to Harborview Medical Center in critical condition.

Police told reporters on scene that it doesn’t appear to be a random shooting, but details are few as detectives search for a suspect. If you have any information about the shooting, SPD asks you to call 206-233-5000.