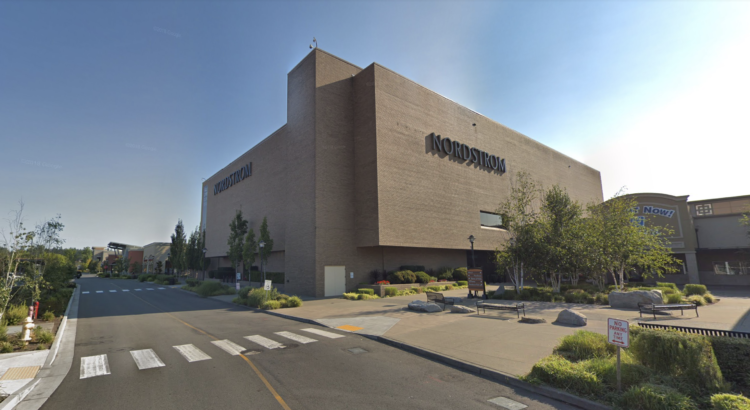 If you’re a Nordstrom shopper, you’ll soon have a longer commute.

Nordstrom will close its Northgate Mall store this August, according to a report in the Seattle Times. The Nordstrom Rack store will remain open.

“This decision will allow us to focus on serving customers at nearby Nordstrom stores, including our Northgate Nordstrom Rack, as well as online,” the company said in a statement.

The store’s 170 employees will be relocated to other Nordstrom locations, the company said.

Nordstrom at Northgate is scheduled to close August 9th.

It’s sad to see Northgate slide into decline, I’ve been shopping there for over 50 years since I was a kid. Have a lot of good memories of Northgate.

None of the “healthy at any size” crowd can fit into their merchandise, so they are going the way of the the T-Rex in this age of the Brontosaurus.

Malls are still a great place to get crime’d by “disadvantaged youth”, though!
Those free Orca cards are being put to good use.

You couldn’t pay me to go to a mall. Except University Village. Delfinos Pizza is the best!

Spoken like a true millennial. Someday soon you to will figure out you just can’t sample cologne online, or actually talk to a salesperson, making eye contact, ending/ consummating the amazing trail of commerce. Good luck with drones delivering your food and clothes pal.

Millennial here! Actually, you can order samples of perfume and cologne online. I literally just got some in the mail yesterday. It’s pretty nice, because you can then smell your samples over the course of a few days, giving your nose time to rest in between (it can only handle a few different scents at a time). So that’s kind of fun.

How cool! I’m far from being a millennial but I would love to be able to try scents at home without going to Nordstrom to pick up samples. Where did you order them from?

How sad indeed. Doing business here in Seattle is a bitch. The theoreticians in place make it quite tough, as they levy more and more taxes and compliances, many times blaming said businesses. Cutting losses is a smart business move. We all do it. Yet few will look to politicians for explanations. People seem to only do this when grobbling for goodies, or reacting to lack of them. This IS on the city council and Durkan’s shift. Good job you hacks. Too bad the media darlings here are for the most part complicit and ask few tough questions of the bullies in charge.

I think you are lacking some context. The big picture is that the mall, like malls across the country, has been doing poorly for years. It is being redeveloped.
From the Master Permit 2018:

“The redevelopment will transform the majority of Northgate Mall into a walkable transit-oriented neighborhood with new office, residential, retail and restaurant uses, a state-of-the-art fitness facility, reconfigured parking, and new open spaces. To realize this vision, parts of the existing mall will be
retained and other parts will be demolished over time to make room for new buildings and outdoor
spaces. ”

You can read the full plan here: http://www.seattle.gov/dpd/AppDocs/GroupMeetings/DRProposal3032291AgendaID6931.pdf

Freja, ask any non-tech biz owner in this city and they will tell you how bad it is. Nothing but taxes to pay for hobo junkies and city bureaucracy.