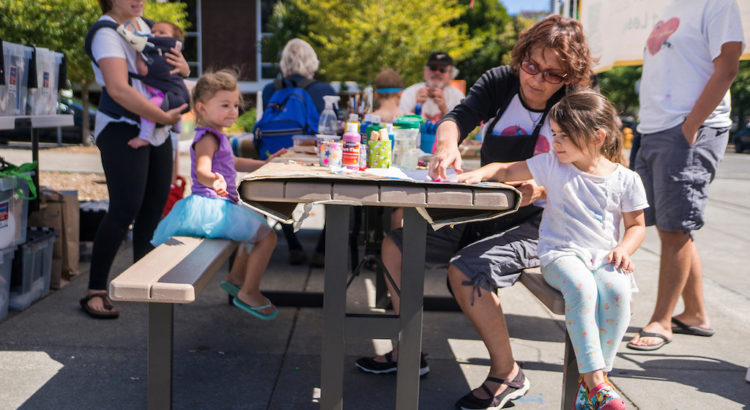 Starting next week, Seattle Parks staff will be at Ballard Commons Park every day with activities in an effort to encourage positive park behavior.

It’s called the Park Concierge program, which will bring a canopy tent with Seattle Parks and Recreation staff running a small booth. They’ll have sidewalk activities for all ages and provide information about the Parks programming throughout the city.

Rachel Schulkin from Seattle Parks tells My Ballard that the program started four years ago in downtown parks in order to encourage “positive park use and activate a space that is under-activated or has seen negative use.”

Schulkin says it works well in parks that have a lot of foot traffic, such as Occidental Park and Westlake, but have been underutilized by the general public.

In other parks, they’ve set up giant Jenga, cornhole, and even ping pong.

“People tend to interact because they’re already walking through, or eating lunch there,” she says.

The Park Concierge will start on Monday, August 12th, from 11am to 8pm, and will be there on a daily basis throughout the summer.

positive park behavior = being white and having a house.

positive park behavior = not shooting up, not being belligerent with passersby, not living there, not leaving nasty messes behind, not being an all around dysfunctional POS….

That’s down right disgusting. Do us all here a GIANT favor and turn off MSLSD and CNN.

i hope it has a positive impact.

lol “positive park behavior”? what a mealy mouthed way of addressing the disfunctional sh^&show that is permitted to continue there.

will they address the President and the vehicle he’s been parking there for like 9 years?

will they actually be able to do anything besides scold the junkie thieves that skulk around there?

That park is on life support. But please, vote for Sawant and Strauss! They’ll be sure to change that.

So people enjoying the park and it’s amenities, all day, every day, is “on life support”?

You wish. I find DP to be deplorable.

This is a good thing, we should support it. Maybe we can have a lively, safe and fun place in our community where people can just have a positive experience.

So basically kick the poor people out?

Yep, screw the poor people! If they don’t pay taxes, then, they don’t get to use a park, because, hey, that’s funded through taxpayer money. I’m glad you’re finally on the same page as the rest of us, elenchos2!

Was there yesterday walking my dog and some of the homeless had covered the entire area between the skate bowl and fountain with trash. One of them who was obviously tweeked out of his mind started washing his clothes in the water feature and throwing various odds and ends around. I thought this was a bit odd seeing that Urban Rest Stop offers laundry services to the homeless and is less than a block away. Then amazingly a news van shows up and a camera crew starts filming all of this as part of a promo spot on the homeless crisis. Over in the other corner of the park there were at least a half dozen other homeless spread out along with all of their possessions in the grass. One of the regulars started screaming about f’in society and how he was gonna f every body up no matter what. this screaming went on for a good 5 minutes before I took off.

I do hope it helps but let’s get real. There is already a police car parked on that block practically full time and It doesn’t make any difference.

Sadly, it was a total shitshow yesterday. I walked back from Ballard Health Club around 4:45 PM and was floored by the degradation. Dude has a chop shop going right at the water park. And St. Luke’s just whistles into the wind…

yep. st lukes is a major problem here – sure, it sounds noble and lovely to feed all of these people but then they just settle into the neighborhood.

parks are not meant for this crap – maybe a nap in the grass here or there, but they are not intended for living in, chopping bikes in, doing drugs in, causing daily disturbances in.

i’m sure someone will correct me and teach me how a righteous progressive would view this mess but i think most normal people with a brain can see that this is no way to treat a park.

The Titanic simply couldn’t turn around in a minute or 2. Seattle didn’t get so crappy in a year or 2 either. It took years to get all the correct people here and “in line”. This IS what happens to a city with 1 party rule. Same with the entire state of CA; zero to little alternative ideas/opinions. And when there is 1 or 2 they get blamed, made fun of and shut down. “Compassion” is not living in an RV and hanging out in a park. To many though it means spending your neighbors money. Money to keep these people around for some reason?

Where the hell are the “upitty women”, many with babies, to get together and rid this park of the nar-do-wells? We certainly hear and see plenty of them around , making names for themsleves and being real active. Been wondering for years now why a group of women don’t simply “handle this”. Elenchos, is this you? Or are you too busy?

Wait, elenchos2 isn’t another one of your split personalities?