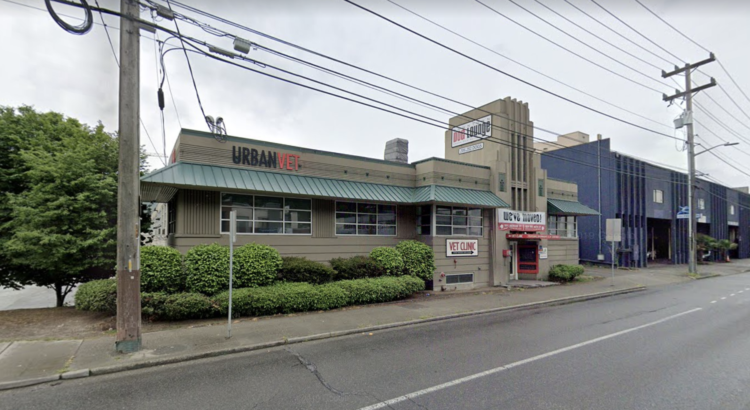 A former potato chip and popcorn factory in Interbay has been nominated for historic landmark status.

The building, located at 1405 Elliott Avenue W, was built in 1931 as a two-story potato chip and horseradish processing factory, owned by the Portland-based Williams & Company.

According to the nomination application, the factory was designed by Seattle architect George Wellington Stoddard in the Art Deco style, one of three concrete Art Deco structures that he designed in 1931, “utilizing formwork to create decorative effects.”

Williams & Company used the building throughout the 40s and 50s, and in 1960, the company was bought out by Frito-Lay. No changes were made to the building, and they continued making potato chips until 1972 until they sold the property to Alfred S. and Gertrude Lapidus, owners of the LA-based Al Lapidus Popcorn Company, who sold pre- and unpopped popcorn to movie theaters.

The building was then occupied by the Harlan Fairbanks Company, which also produced bagged popcorn.

“In 1976, the machinery in the subject building popped 3,000 pounds of popcorn a day, in a large air-heated popper with a rotating drum, with separate equipment for bagging,” the nomination history reads.

Harlan Fairbanks occupied the building until 1990, and today, the company is based in Kent, where it sells popcorn machines and supplies.

In the 1990s, the building had various occupants: a lithographer, a billing service, a paper company, and woodworking company. And since 2000, the property has been owned by a series of LLCs, including the current owner, Elliot Way Partners LLC.

In 2004, the upper floor building (facing 15th Ave) was renovated to accommodate Downtown Dog Lounge, a vet, and a catering company. The building is currently vacant.

The Landmarks Preservation Board will consider the nomination in a public meeting on Wednesday, Nov. 6 at 3:30pm at Seattle City Hall (600 4th Avenue, Floor L2) in the Boards & Commissions Room L2-80.

Are these people making these big money decisions elected? Making multi-million $$ decisions shouldn’t be done arbitrarily. It shouldn’t be based on feelings or wetting a finger and thrusting it into the rarified Seattle air either. Why not pay to move the thing to a better spot, where it can be used again and perhaps even toured etc. Plenty of $$ around here to do this. This could be your property some day the city decides they tell you what to do with it. As in retirement $$.

LOL you rube. The process to assign landmark status is one of the most thorough and — some would even say — onerous processes in local government. Any property can be nominated and the results are usually pretty solid. For instance, Comrade Sawant’s attempt to save the Showbox faces numerous headwinds, not the least of which is the fact the Landmarks Preservation Board decided against listing it some years ago. If anything, the LPB saves too little of our built heritage. Go piss on a power line, dude! End your misery! :)

What you’ve just said is one of the most insanely idiotic things I have ever heard. At no point in your rambling, incoherent response were you even close to anything that could be considered a rational thought. Everyone in this comment forum is now dumber for having read it. I award you no points, and may God have mercy on your soul.

Are you responding to me?

so you admit to being dumber, i second that.

Often the nomination is made by a developer…hoping to be denied landmark status so they can then tear the building down.