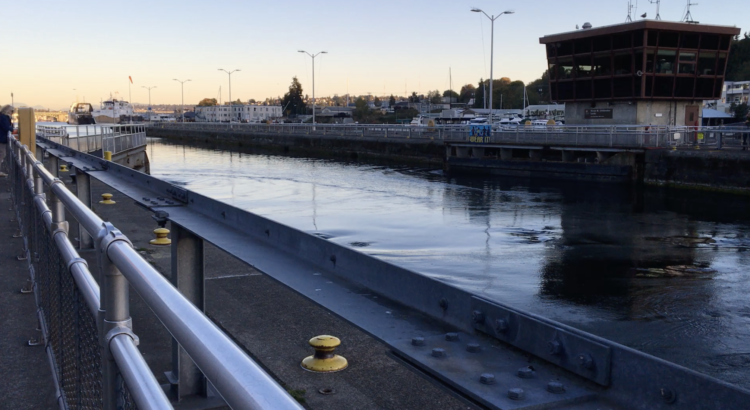 Starting tomorrow (Oct 12.), the large chamber at the Ballard Locks will close for an extended project to replace the chamber’s filling culvert valves.

The closure is expected to last 53 days — one month longer than the typical November annual maintenance closure. The small chamber will remain open during the work, and will be available for vessels up to 28-feet-wide by 123-feet-long. The U.S. Army Corps are aiming for a December 3rd reopening.

This will be the first of four extended closures, part of the $10.5 million, multi-year contract to replace the large lock chamber’s 102-year-old filling culvert gates. The project will replace the original valves, called Stoney Gate Valves, designed and originally used during the Panama Canal construction.

The valves, which are underwater during regular operations, seal off the 8-feet-6-inch wide by 14-feet tall filling culverts.

“The contractor will be jack hammering out old components that extend up nearly 30 feet in a space that is only about 3-feet wide,” project manager Peter Gibson said. “It was constructed more than 102-years ago and we really don’t know what they will encounter during the demolition portion.”

It’s a tricky operation — after demolition, crews will build forms to create the new valve component space and will then pour concrete. Once the concrete dries (about one week), they’ll start installing the new system.

According to the U.S. Army Corps, installation will require drilling about 600 holes up to 1-inch in diameter and 20-inches deep into the concrete.

During this first extended closure, the contractor and Corps officials will meet to look for ways to speed up the process for the subsequent valve replacements and reduce the closure time.

Nice this one lasted 102 years ! I wonder how long the new one will last ? Back in the old days things were built to last a lot longer than the stuff built now a days ! Isn’t that funny how that works !

Are you saying the Army Corps is lame? Why do you hate America?

Put the shrimp ladder back in

Yes, it’s unfair that short people have to get out of the water and walk the long way around.

You’re still posting here after you slandered that business? Maybe you should find somewhere to go play checkers instead.