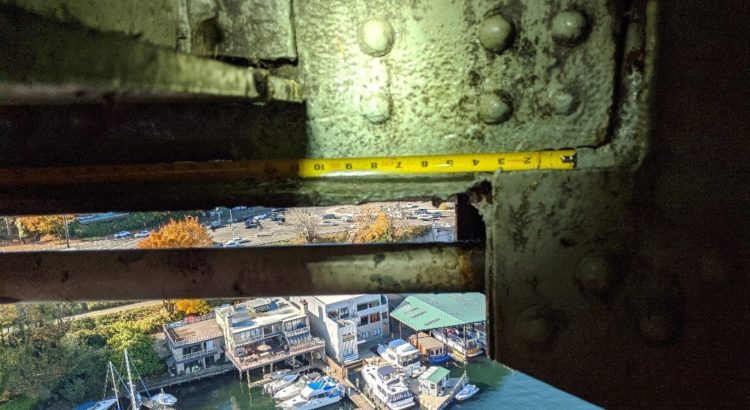 Work to repair a damaged support beam on the Aurora Bridge will begin tomorrow, Oct. 31.

The damage was discovered on Sunday, during an in-depth inspection of the underside of the bridge. Washington State Department of Transportation (WSDOT) crews found advanced deterioration of steel on a support beam (also known as a stringer), adding pressure on the next beam, which is now carrying twice the weight it was designed for.

WSDOT says the bridge is still safe to use, but to prevent further damage and reduce the strain on the bridge, they closed the right lane of southbound travel until repairs are made. That closure will remain in effect until 9pm tomorrow night, when traffic will be further reduced to two lanes in each direction as crews begin around-the-clock work for the next 10 days to repair the damaged beam.

Temporary lane markings will shift a single lane of southbound traffic into the northbound lanes, allowing two lanes of travel in each direction over the bridge as repairs are made, WSDOT says. The lane closures will create room for contractor crews to stage equipment during the repairs.

The west walkway will be closed during the repairs, but the east sidewalk will remain open.