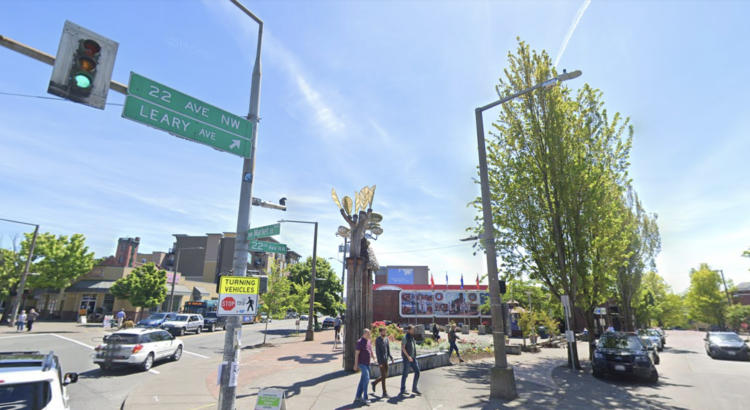 Update 2:25pm: More details have just been released about this morning’s robbery, which happened just before 11am near the intersection of 20th Ave NW and Leary.

Seattle Police say the suspect grabbed a woman’s purse and fled, and was chased by a bystander. The suspect then fired a shot at the ground, before jumping into a dark-colored SUV.

Police say the suspect is a black male in his 40s with facial hair, wearing a puffy jacket and dark pants.

The robbery victim tried to grab onto the suspect’s car when he drove away, but fell to the ground and sustained injuries — she was sent to Harborview Medical Center for further treatment.

Officers located the suspect’s car, found driving southbound on Aurora Ave N, but lost sight of it south of the stadiums. Police ask that anyone with information call 206-684-5535.

Original: Officers are investigating an armed robbery that happened at about midday on Leary Ave NW in central Ballard.

According to Detective Mark Jamieson, the suspect discharged a firearm while robbing a person on the sidewalk near Bergen Place Park, and fled in a black SUV.

This is where witnesses tell me the armed robber fired a shot into the Ballard sidewalk. The bullet may have ricocheted and cracked those 2 windows. #komonews pic.twitter.com/GMxpUtBonF

Detective Jamieson tells My Ballard that the suspect left Ballard, and is now believed to be south of downtown Seattle.

This is an active and ongoing case — we’ll update with new information when it becomes available.

This is a direct result of over-policing. We shouldn’t be locking people up, we should be rehabilitating them.

uh. This person was not locked up. Catch and release is a Seattle policy. and. Over-policing….in the Northern sector of Seattle nothing could be further from the truth. Criminals rule in this area.

they don’t have the suspect, you can’t know anything about him, why speak?

Shut it troll. You lock up a person who steals a woman’s purse and then fires a gun in public. Too bad you didn’t catch that ricochet. Might give you a clearer perspective on the idiocy you spew daily.

I do not see why this article even points out what race he is. Why is this even important. In all honesty, for how many atrocities have been done to his assigned race over the past generations, the social ledger should allow him to get away with this.

Its called Factual information. The fact you can’t handle FACTS, is your personal problem.
By the way you are NOT assigned a race, like a HS locker. Please, don’t give birth OR vote. Thank you.

You ARE assigned a race since it is a social construct. Science is against you this and i’m assuming this is just another thing that history will you see on the wrong side of.

Given birth and voted :) Say “facts” one more time and your white Santa might appear ahahahahaha

It points out what race he is because he committed a crime. His physical description of which his skin color is part of that is valid. And are you seriously suggesting that we should legalize people rob another person because of race?

Oh puullleeese. Please just STFU. Any damn credibility is long gone with you and ANY of your pithy comments. You ARE officially part of THE problem. Please seek help.

You must be high.

Your down votes should tell you you are correct. Liberals like sanctuary cities, where they pick which laws to support and which to ignore. The Police hands are tied. The Mayor is a Liberal as is the Seattle City attorney. Look at their records. Thats why getting shot in Ballard is more likely than not these days.

“Survival crime”. Thankfully it’s looking like Mike O’Brien is going to win again so this pos will be protected.

I hope he still had time to vote.

The police can only follow the guidelines the city government tells them to do ! The police arrest people and the courts just turn them lose to commit more crimes ! That’s one reason COPS are leaving the seattle police force to go to work somewhere else !

Nothing on this ballot has anything to do with public safety. Unless you think council members have any pull with the city attorney. Which they don’t

That’s not true at all. There are many ways SCC influences public safety. Police budget is just one.

60% of seattleites will not vote today. You deserve to be the person robbed.

Exactly. And I don’t want to hear any bitching about car prowls, stolen mail, burglaries, needles, bombed out RVs, or camping in parks by those of you who supported Mike Obrien 2.0. You were warned.

How do you know they identify as male? A bit presumptuous, are we? Perhaps that’s the sort of attitude that led them to this.

So, you’re saying that anytime someone gets misgendered, they go out and become criminals? Perhaps you’d like to share that sentiment with the local LGBTQ+ community? I’m sure they’d have a lot to say about your statement.