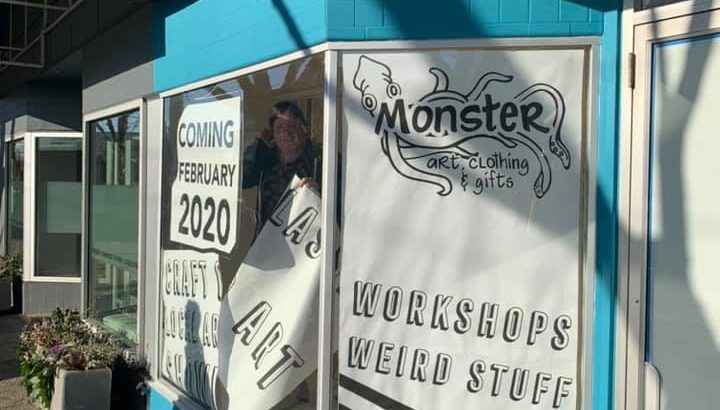 After over a decade on Ballard Ave, local gift store Monster: Art, Clothing & Gifts is moving to a new location on Market St.

Monster owner Rosalie Gale says the main reason for the move is because she wasn’t able to negotiate a favorable lease renewal at their current location on the corner of 20th Ave NW and Ballard Ave.

“I decided to see what else was available in the neighborhood because I knew I wanted to stay in Ballard,” Gale tells My Ballard. She said she was initially looking to rent the former Don Willis Furniture space, but then stumbled upon the space next door, the former Tai Chi and Qigong school called Embrace the Moon at 1716 NW Market St.

At three times the size of their current location, the new spot will allow Monster to expand and offer more art classes to the public. They’ve been doing a monthly stitching class for the past year, but with a dedicated classroom in the new location, they’ll start hosting regular craft nights for customers to draw, knit, stitch, or make buttons.

Gale and her husband Douglas are the third owners of Monster — they’re both local artists who invented Shower Art, which is waterproof art you can hang in the shower, held up by suction cups. They also have a store in Pike Place Market (and online store) called Ugly Baby.

The grand opening is for the new Monster is planned for February of 2020 — we’ll update when it gets closer to the date.

Thanks for the tip and photo from Lauri Miller, who posted about the move in the My Ballard Group.

Probably should have just closed the entrance to the main street.

Somebody should close your main entrance.

No no no, we want this level headed person around. We can’t make or dream up the drivel they bring to this site. It’s MSNBC, alive ,and living rent free in what’s LEFT of their brains.

Buy something and run something, besides your big mouth. Then after making payroll, paying property taxes, local/federal taxes, get back to us here.

I do run a small business

Good luck Rosalie. Keeping up, complying/conforming isn’t fun and is another full time gig. Owning and running a business isn’t for everybody.