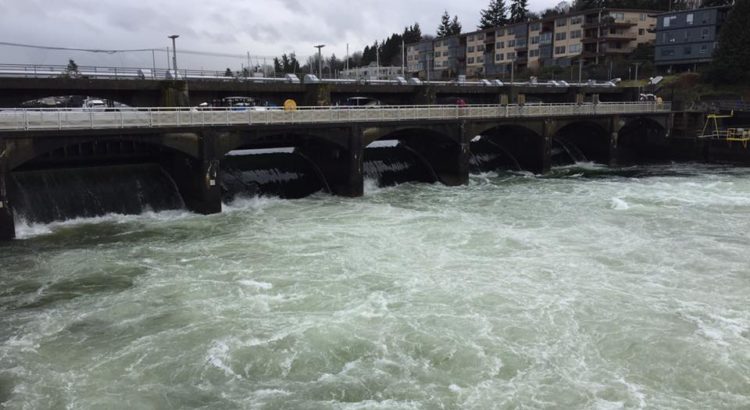 Two rowers* had quite a scare while attempting to traverse the Ballard Locks this Sunday morning, and it sounds like one rower even went through the spillway itself. Fortunately, both were rescued without injury.

Writing in the My Ballard Facebook Group, Amanda said she saw what happened.

“We saw the couple in the water, and along with others ran to get help. The man then went through the spillway and was rescued pretty quickly with a float ring getting pulled to a nearby ladder,” she wrote. “A firefighter threw her a rope and they finally pulled her to a nearby ladder. Both were up and talking afterwards. It was terrifying.”

Nancy said she witnessed the rescue, as well.

“They very quickly approached the dam and suddenly a woman in one kayak was against the dam and yelling and the person in the second kayak disappeared from my view,” she wrote. “The kayak was still visible, but not the person. Workers from the locks threw orange rescue rings to the kayakers to keep them afloat until firefighters arrived.”

Seattle Fire said the two rowers “fell into the water between the salt water and fresh water sides” at 9:45 am. They were rescued without injury.

Kayakers frequently paddle through the Locks with other boat traffic, but Nancy said it didn’t appear that the warning cable was visible this morning.

(Thanks to Silver for the initial report. Updated photo above of the spillway from the Ballard Locks Facebook page. Previous photo showed kayakers at the Locks over the summer.)

*Correction: An earlier version of this story stated that the people were in kayaks. Seattle Fire says they were in fact rowers.

A correction to this story has been made by Kiro 7 news. The individuals rescued were rowers out of Lake union and not kayakers. The photo used for this article is of a local small business leading a professionally guided kayak tour through the Ballard Locks. Using this photo inaccurately is harmful to the reputation of a locally owned and operated Ballard small business.