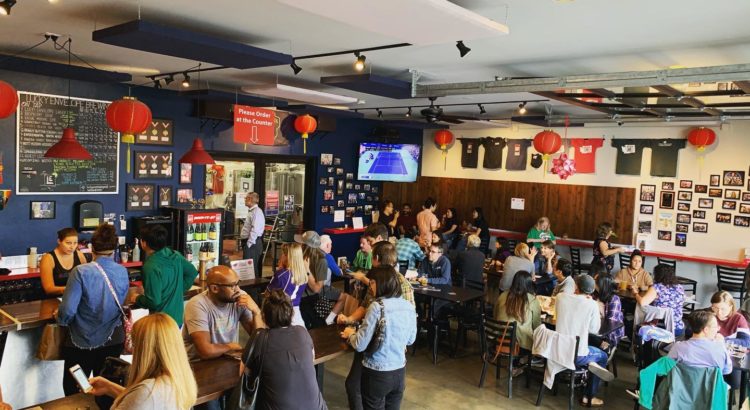 Ballard’s Lucky Envelope Brewery will be celebrating the Chinese New Year next week with a collaboration IPA release called Metal Rat — in honor of the Year of the Rat.

One of the former managers of Lucky Envelope now brews at Highland Brewing Company in Asheville, North Carolina, which is the other brewery making Metal Rat, a hazy IPA brewed on both costs and inspired by Chinese cultural heritage. In cross-country Chinese New Year celebrations, it will be released at both breweries on Jan. 25.

Lucky Envelope says the beer is made with ingredients from both coasts: Lotus hops from Hopsteiner in Yakima, WA and malted wheat from both Epiphany in North Carolina and Skagit Valley Malting in Washington.

The two breweries, both owned by Chinese Americans, were inspired to collaborate on the IPA to celebrate and honor their Chinese roots.

“One of our favorite things to do at Lucky Envelope Brewing is to share fond memories of our cultural upbringing,” Barry Chan, Brewmaster and Co-founder of Lucky Envelope said in a release about the event. “Our beers have regularly featured ingredients and stories influenced by our experiences. We hope this coast-to-coast collaboration helps create conversations on diversity and inclusion in the brew community.”

Lucky Envelope’s will be celebrating the Lunar New Year all week next week, starting with a Teahouse Beer Day on Monday, Jan. 20; Cocktail Beer Day on Wednesday, Jan. 22; culminating with the official Chinese New Year Celebration on Saturday, Jan. 25 and Sunday, Jan. 26.

During the official celebration on the weekend, the brewery will be giving away 88 red envelopes each day with Chinese New Year merchandise available for purchase. Panda Dim Sum will be on-site 4 – 8pm both days serving Chinese cuisine from their food truck.

elenchos2 – this will be the year of the rat so will you be ratting on us if we do celebrate ?

Also both Barry Chan, Brewmaster & Co-Founder, and Raymond Kwan, Director of Operations & Co-Founder, appear to me to be Asian and they are inviting people to celebrate the New Year with them!
https://www.luckyenvelopebrewing.com/meet-the-family/

Yes but I doubt those folks will be drinking beer!