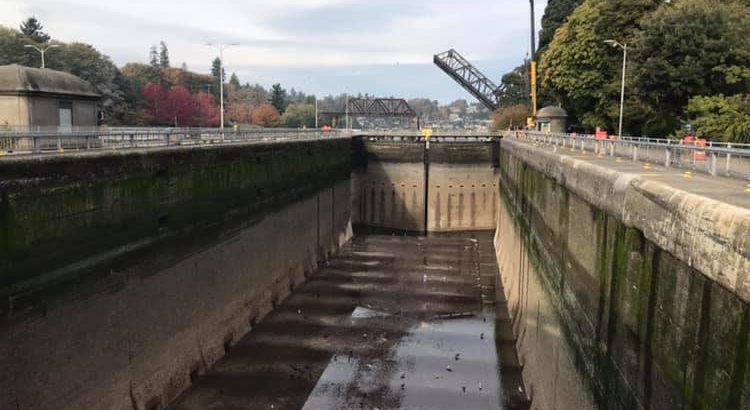 The large chamber of the Ballard Locks will be closing for 53 days starting Feb. 12.

This is the second scheduled extended closure to allow crews to replace the chamber’s filling culvert valves.

“We were able to meet our scheduled re-opening date with our first closure in the fall, and we’re extremely confident we’ll be back in operation by no later than April 4,” Locks Operations Manager Jon Hofstra said in a statement.

The project will replace the 102-year-old filling culvert gates, known as as the Stoney Gate Valves, originally designed and used during the Panama Canal construction.

“The contractor is jack hammering out old components that extend up nearly 30 feet in a space that is only about 3-feet wide,” Project Manager Peter Gibson said. “Once demolition is complete, forms will be erected to create the new valve component space and then concrete poured.”

Beginning Feb. 17, the contractor will be running crews 24 hours a day for three weeks, according to the U.S. Army Corps of Engineers. The work will take place in the machine access area below ground, which will muffle the sounds, but cranes and other equipment will be active above ground.

The small chamber will remain open to vessels up to 28-feet wide by 123-feet long during the large chamber closure.

Boaters all must attend a mandatory safety class and must then display the sticker they receive. These fees go to pay for many services, including the locks. Question: when will the city do the same exact thing to cyclists? Seems they need the revenue. Autos are sanctioned/regulated and made to all have signals, license plates, good tires, etc. Why is it cyclists aren’t included here too? They certainly have been given plenty with road diets all over the city. Looky here, I had a progressive idea.

This is an article on the Ballard Locks. How did your bizarre brain end up on bicycles?

Seattle had bicycle licensing many years ago and the program cost well more than it brought in.

bikes and the locks are modes of TRANSPORTATION. engage your brain before your Jaw.

In addition to being a quite the logical leap, it is incorrect. Breakdown of the wrongness follows:
– The Locks are maintained by the Army Corps of Engineers, which is a federal agency. The boater education program is run by the state parks department.
– You are not required to attend a class. You can also take an equivalency exam, study at home, or take an online course.
– Once you complete your boater education, you get a card (somewhat like a driver license) that you are to carry with you when operating a motor vessel. There isn’t a “sticker” for the boater card.
– The fees from the boater education card, which I don’t believe is self-funding, go back into boater education and law enforcement. Since the boater safety card only costs $10, I doubt it is a significant part of the budget. Vessel licensing and excise taxes comprise a far larger portion of the budget.

If you actually want to become informed on our state’s boating laws and programs, I recommend starting here: https://parks.state.wa.us/435/Boating

Have a good day!

Good idea, but those cyclists are already contributing… a very small % of them don’t also have a car that is subject to all the taxation/regulation that you mention.
Now if we could only get all road users, vehicular and cyclists alike to follow the laws of the road, then we’d be getting somewhere!

I am sure that today you do not need to spend time on your own writing written works – just find essay writing services that can do it for you. The main thing in this matter is to find really qualified and reliable writers who will cope with any topic on time and without plagiarism.