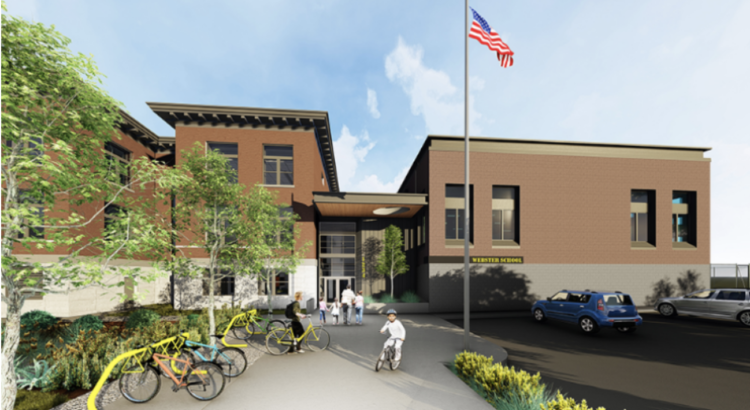 The Ballard District Council presented the plan for the new school location at a meeting Wednesday evening to a packed house of curious parents and concerned members of the Sunset Hill neighborhood.

Licton Springs’ move to the Webster School building in Ballard comes as a solution to overcrowding in its current building, which it has shared with Robert Eagle Staff Middle School since 2017.

In a school board action report submitted in October, the decision was approved by Seattle School Board members.

“We are relocating to the Webster building so [the] full K-8 program can grow,” Butler Ginolfi said.

Licton Springs has about 170 students enrolled and 25 teachers, Butler Ginolfi said. The new building design will consist of three floors and have a capacity of 325 students. That’s a big leap in space from Robert Eagle, where art and science were being taught in one room, the library was in the hallway and middle-school math was being taught in an open corner off another hallway according to a 2017 KNKX article.

Vice President and Ballard District Council member Angie Gerrald led a go-around at the meeting Wednesday asking why each person was there. New parents of the neighborhood, older community members, and parents of children already attending Licton Springs expressed their concern for traffic flow and the new school design.

“I’ve been invested in Licton for seven years because of the sense of community,” Licton Springs Parent Teacher Organization President Blaine Parce said. “I’ve had two kids go through the program. I have a 4th grader who is in it right now and will have my 2-year-old also go through it.”

The option school, which has a Since Time Immemorial curriculum along with the regular state curriculum, teaches a basic framework of Indian history and understanding of tribal sovereignty with the help of local tribes, Butler Ginolfi said.

“There is a misunderstanding that we’re a Native-focus school,” Butler Ginolfi said. “Anyone can attend Licton. A lot of Native families just feel recognized and comfortable with us because we incorporate authors of color into our lessons.”

There is a 60 percent enrollment of students of color at the school and Butler Ginolfi expressed they are dedicated to sustaining an inclusive environment in which all students can feel a sense of belonging.

“We are not for everyone,” Butler Ginolfi said. “We encourage families to learn more about us before enrolling.”

In their permanent move everyone has to apply to the option school, Butler Ginolfi said. Children who are already students of Licton Springs will be grandfathered in.

There will be a larger geographic boundary of neighborhoods who can attend, and bus routes will expand so more families have the option of joining the school, Mack said.

“Traffic flow was evaluated at 450 students and 44 to 55 staff in the original analysis,” Principal and Vice President of Heffron Transportation Inc. Tod McBryan said. “At the beginning of the school day there would be a peak of 162 vehicles entering and 133 exiting.”

The original analysis of Webster identified a capacity of 450 students. Now as they near completion, they adjusted that number to 325, McBryan said. A new analysis would show a smaller estimate of traffic flow as well.

Webster building was constructed in 1908 and served as an elementary school through 1979. In 1980 it became The Nordic Heritage Museum but after many years, the museum moved to a new facility in 2018.

As part of the modernization, the original building, dining room, library and second and third floor common areas will be restored, Ho said, as Webster building was landmarked in 2015.

In addition to the restoration, the district will also make earthquake safety improvements, replace and update existing building systems, and construct a new gymnasium. New technology systems will be added to meet district technical standards.

Once completed, the school will total 52,500 square feet; that’s 44,800 square feet in the historical building, plus a 7,700-square-foot addition for the new gym and entrance, Ho said.

“The original analysis of Webster identified a capacity of 450 students. Now as they near completion, they adjusted that number to 325,” McBryan said.

Figuring 25 kids to a classroom, that’s five full classrooms that “disappeared.” Quite a discrepancy!

Competence is not a job requirement to work in admin at Seattle Public Schools.

It is always a good experience to read such kind of stuff. I always prefer to read local journalism, which proves helpful My-assignment.help for me. Keep sharing such informational stuff.

Great article! I would like to share it with my friends also. Today, I found a very useful translation service while reading this article where I can translate very easily with their best service.