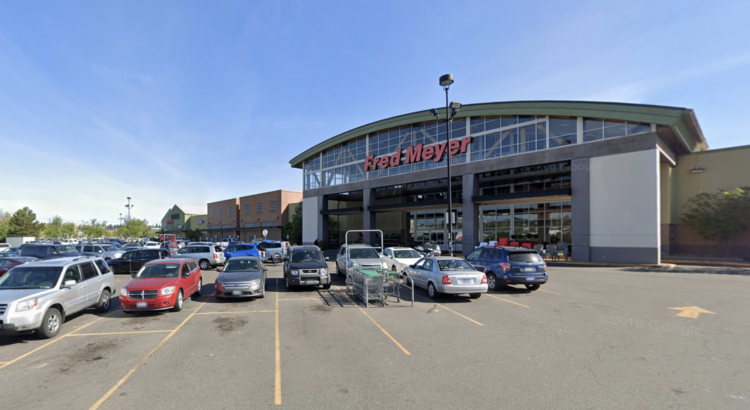 The woman that was struck by a vehicle in the parking lot at Fred Meyer has died from her injuries, and police are now treating it as a homicide investigation. Her family is offering an $11,000 reward for finding the suspect.

The incident happened at noon on Thursday, March 19 at the Ballard Fred Meyer. According to KOMO, the victim was Lori Tate, who was with her 12-year-old son when the gold Toyota Tacoma hit her. The vehicle was reported as stolen and was later found burned in Burien.

Tate was taken to Harborview, and died seven days later from her injuries.

Homicide detectives are investigating, and ask that anyone with information contact the Seattle Police Department Violent Crimes tip line at (206) 233-5000.

Absolutely terrible. Yet another sign our catch and release program, AKA: justice system, has failed us all. Stolen and burned. Hmm sounds like regular tax paying caring folks to me. Cartels are here now due to this lax attitude. To this family: I feel terrible for your unnecessary loss.

Yet another sign our catch and release program, AKA: justice system, has failed us all.

You clearly know who the suspect is, so I’d encourage you to turn them into the police.

Thanks Dan Strauss voters! You’ve made Seattle the #1 destination for heroin addicts and car thieves. Nice job social justice dippy brains. What’s your next proposal? Let me guess – making heroin legal? Nope, got that already (7 grams legal carrying in King County is enough for 36 hrs for an addict). Catch and release? Nope, got that one too. Hmmm, I know, a common sense law to get heroin addicts off of public property. Got that already? Geez, you social justice idiots have it all covered. Glad you are only thinking of reducing safety and increasing crime. Nice job Straussies!

Go find something productive to do with your time, loser!

Like clean up heroin needles from Ballard Commons park? I can’t. Coronavirus you dumbass.

No, try something you are obviously in desperate need of such as educating yourself, loser.

Like clean up the poo poo and pee pee from the perfectly sane people that don’t do heroin next to the library? That would help the community. Or clean up the drug camps on Sea View? Again, help to community. What’s wrong with that? Awwww, the homeless drug addicts that the city enables for social justice reasons should not be bothered to clean up their own garbage and needles. Thanks Dan Strauss voters!!

Based on your last psychobabble comment, therapy would make sense for you as well. Either way, good luck with your Dan Strauss, homeless and defecation fetish, loser!

Good luck not stepping in human crap or heroin needle walking around Seattle. Nice job social justice people! And remember, if it looks like human crap, it is! Take care neighbor.

“Working” at home isn’t treating you too well these days, is it Harley Lever?

I don’t even know who that guy is.

To be fair, Harley Lever came from a well-intentioned place. In case you haven’t noticed it, he’s old news. The new voice at his old website is some tinfoil hat blogger and his attendants who have a much Trumpier, scaredy cat vibe. I met HL at a campaign event and never got the “loony tunes” vibe from him. Just sharing my 2 cents.

I hope the police catch this or these punks and get them off the streets for good ! Chances are they have a bad record and the courts turned them loose with minor punishment ! My prayers for the child this will give him nightmares the rest of his life ! I hope he gets the counseling he will need ! Lets all pray for this child !