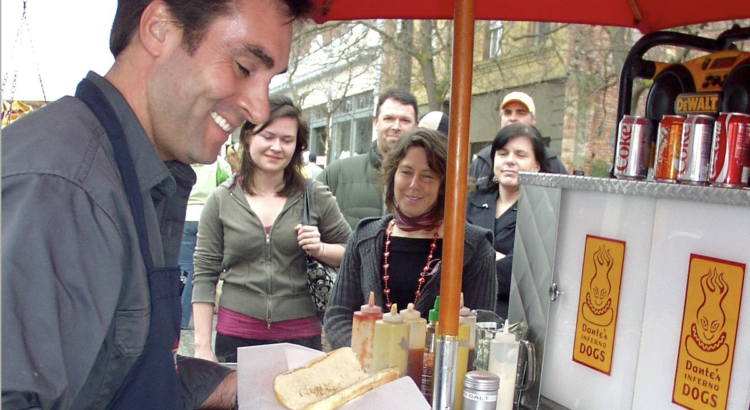 The City of Seattle has just announced the first round of 250 grantees for the Small Business Stabilization Fund, four of which are in Ballard.

There were nearly 9,000 applicants for the $2.5 million fund, which provides a $10,000 grant to each small business. The Ballard businesses granted funds in the first round are Kitchen Istanbul, Dante’s Inferno Dogs, S/T Hooligans, and Poke Square.

Dante’s Inferno Dogs relies primarily on catering events, which means business has essentially stopped altogether with the COVID-19 stay-home mandate. Owner Dante Rivera has had to lay off his staff of five, and is back to running a one-man show. He says that unfortunately, take-out isn’t an option for his business: “We aren’t set up for that,” Rivera says. “Our price point is minimal—we rely on volume.”

Usually, Dante’s caters up to 25 jobs per week. “Those completely dried up,” he says, adding that his next event on the books isn’t until early June.

Rivera says that during the pandemic, he’s continuing with his charitable donations to the Ballard Food Bank, Boys & Girls Club, and Fare Start, where he’ll be feeding workers this afternoon.

“I feel very, very fortunate and grateful,”Rivera says. “It’s coming at a much needed time to give me a buffer.” Most of the $10,000 went to paying his fixed costs: rent, insurance, payroll, and vendors.

In a press release about the funding, Mayor Jenny Durkan says the sheer number of applicants shows that the need for economic assistance is far greater than what the City alone can provide. Comcast has pledged $50,000 for the next round of assistance, but more is needed—Mayor Durkan highlighted the need for donations from the private sector, philanthropic partners, and economic relief from the federal government.

“I urge all those who are able to support future rounds of this fund, and also support our small businesses by ordering pickup, delivery, or shopping online during this unprecedented time,” Mayor Durkan says. “While we to do everything we can at the City level to support small businesses, I will continue to advocate at the state and federal level to ensure our region receives the economic relief we need, both now and as we recover.”

After being screened for eligibility, the Office of Economic Development (OED) categorized businesses as being from high or low-displacement areas of Seattle, and then awardees from each displacement category were selected by lottery.

Individuals and organizations can donate to the fund directly by emailing covidpledge@seattle.gov.

hopefully this photo was taken BEFORE distancing was required

terryj – that looks like Ballard Ave and the Sunday market. So, yes that was before all of this.
Why would you even post that?

Small business helps develop leadership skills. I recommend reading a short essay https://studyhippo.com/essay-organizational-behaviour-and-leadership/ on this topic. We often use different resources to develop our satellite projects, but sometimes we lack leadership skills. You are not born a leader because they are learned skills.

Even this kind of help will be very valuable for small businesses.

You need to contact professionals in order to do business properly. No other way is because many people don’t really know what to do and how. Fortunately, I could find the information and only managed to get in touch with the professionals quickly on these cases. You can look, for example, at the salesforce lightning implementation and draw conclusions already. I know you can earn more than you spend after having received a qualified consultant, because I hope I will be able to help you. I hope you’ll succeed. Good luck and success.