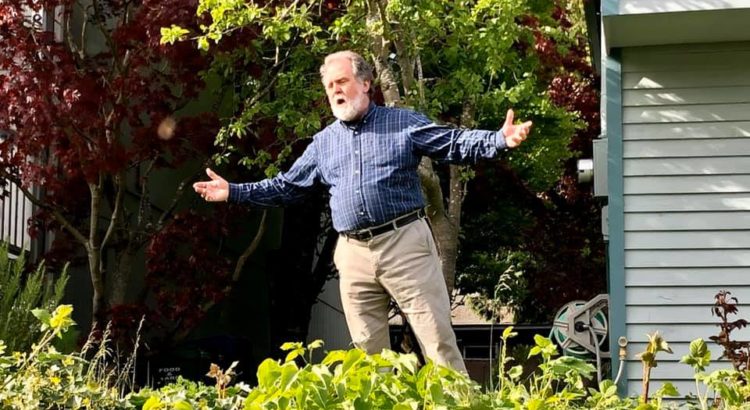 In case you missed it, Ballard is home to the famous one-man, front-lawn opera house.

Stephen Wall, a tenor with the Seattle Opera, began his lawn concerts in early April in front of his home near the corner of 9th Ave NW and NW 60th St. As he told the Seattle Times, he was taking a break from his home studio, where he’s been teaching singing lessons via Zoom. He went outside to play his string bass, and a few people stopped to listen. It was then that he was inspired to sing, after seeing a video of an Italian man performing “Nessun dorma” from his balcony while in quarantine.

Almost every weekday evening since then, he’s emerged from his home to sing to his neighbors. And now, he’s offering his concerts as live-streams on his new Ballard Opera Man Facebook page, Monday to Friday at 5pm.

Wall has added a daily event reminder on his page for his weekday Lawn Concerts. If you want to see some highlights from the past month, a few have been posted on YouTube (see above videos, made by Greg Strickland).

Thanks to those who posted about the performances in the My Ballard Group!

Crazy what some people will do for attention.

Good to see the Chinese troll factories are back online.

We missed you elenchos2!

Pretty cool. I’m with everyone else on that street enjoying this performance, forget this quarantine nonsense, time to get out and enjoy life. Thank you Stephen, looking forward to more of your future performances in person.