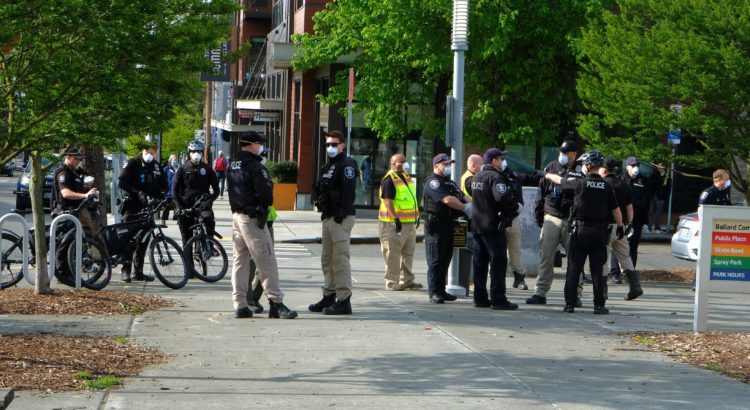 Update Monday PM: According to the City’s Homelessness Response Blog, there were 15 individuals living unsheltered in the unsanctioned encampment at Ballard Commons as of Monday morning. The removal was due to, “immediate and ongoing risks to the public health and safety of the community, including Hepatitis A,” the blog reads. “Living structures also obstructed public rights-of-way, which created further public health risks.”

The Seattle Navigation Team has been visiting the park for several weeks leading up to the cleanup today; they say that since March, 19 individuals in and around Ballard Commons accepted shelter space prior to today’s camp removal. This morning, the team offered shelter to all the individuals at the park when the cleaning started.

Original (Monday AM): On Monday morning, Seattle Police and other city workers were out cleaning up tents and other items from Ballard Commons.

A notice was posted on Saturday to campers who were set up at the park, and today, police were on-site for the sweep. Campers were allowed to take whatever they could carry with them; everything else was loaded into dump trucks and hauled away.

The City had already ramped up efforts to clean the Commons more regularly since cases of Hep A were traced to unsheltered people living in Ballard. In recent weeks, mobile hepatitis vaccinations have been ongoing and additional hygiene stations were added to the park to help ease both the spread of Hep A and COVID-19.

We have a call out to SPD to learn more about the Commons clean-up, and will update with any new information.