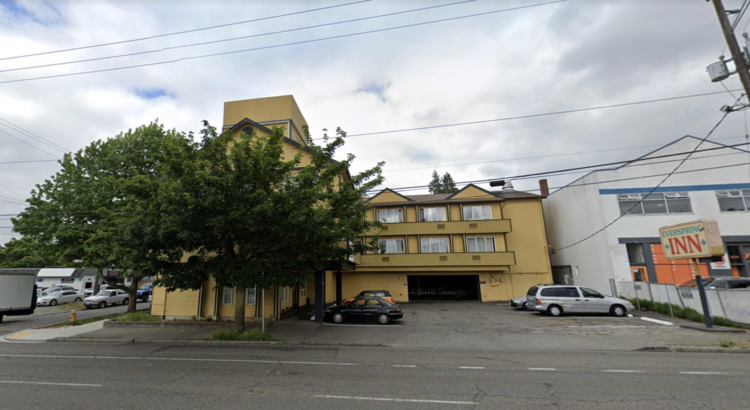 Seattle Police are investigating a fatal shooting in a motel parking lot on corner of N. 82nd and Aurora Ave N.

According to the police report, officers responded to a call of shots fired just after 3 a.m. on Tuesday morning. A woman was declared deceased at the scene, and a man is being treated for life-threatening gunshot wounds at Harborview Medical Center. Police say the suspect fled the scene.

CSI and homicide detectives are investigating, and SPD asks that anyone with information call the Seattle Police Department’s Violent Crimes tip line at (206) 233-5000.

Terrible. Luckily this wasn’t in Ballard.

Why lucky it wasn’t Ballard? This is still someone’s neighborhood and a sad situation it happened at all.

that motel has some of the craziest sh$t going on at just about all times. i drive past it on my way to work and that stretch of aurora is one of the most depressing sections of street in the city.

a week ago on a beautiful sunny morning a woman was slowly ambling through traffic, head down, totally out of it. i honked my horn to try to “wake” her up and she was cognizant enough to flip me the bird.

i’m not sure why this place ( the everspring inn) is able to stay open, its a total mess.

“It’s become common knowledge among the prostitutes that (LIBERAL)Holmes won’t prosecute. So there’s no incentive for these sex workers to risk their lives by turning on their pimp. It could also explain why some sex workers refuse services offered to them by the city.”

Hate Republicans? Doesn’t look like you have much to lose b y trying out something new.

Silly troll, prostitution has been rampant in Seattle since the 1800’s – it didn’t start with your favorite bugaboo “the liberals”

Newton you’re absolutely correct. No one is talking about that though,sorry.
It is about enforcing laws against it and the crime around it. Which Liberal prosecutors do not want to enforce, against the wishes of the Police force.

I haven’t seen a “R” in years around here. All this diversity, inclusion and tolerance though are making me feel so welcome, in the city I was born in. Pete Holmes is feckless. Worse yet, sideshow Bob Ferguson, who’s using his office/power to run for bigger things. Got sanctuary city status? Yup we do. Cartels are here working hard to distribute their goods too. Addicts are flocking here due to liberal tactics, free shit and little time for doing crimes. Can’t make this shit up. Most Ballard folks though are open minded. Problem is, a lot has fallen out. You can always tell a Ballard liberal; just not much though.

I’m really curious which location in this world that you think your viewpoints and opinions would be considered normal.

No seriously, you are convinced that Seattle is the exception to the rule, so by all means.

Wow, MyNorthwest trying to pin all of life’s problems on “those darn Liberals”? This is my shocked face.

Get a legitimate news source.

Another stellar Yelp review for that motel I’m sure:

“Room was OK. Prostitutes in lobby bothered my husband. Murder in driveway. 2-stars”