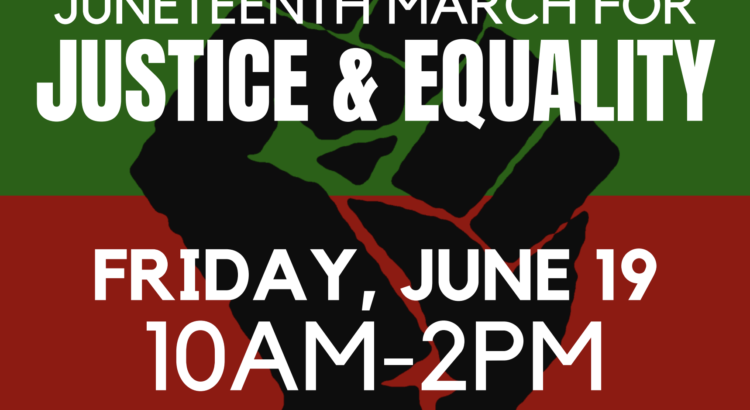 A local racial justice group is marching this Friday across Ballard to commemorate Juneteenth, also known as Emancipation Day.

The march is being organized by Justice for Black Lives, a community group founded by Dmarkis Wigfall. The group will meet at West Woodland Park playground in Phinney (Phinney Ave N & N 59th St) at 10am, and will march through Ballard to 5420 22nd Avenue NW, ending at 2pm.

Wigfall, who works at Rudy’s barbershop in Ballard, says he saw a need to organize within the neighborhood, and recruited a committee including 20 “black/brown/white/Queer/POC/allies that all have ties extending beyond Ballard in the broader Seattle metropolitan area.”

“Together, we want to empower neighbors, friends, and family who have asked what they can do to help in these times and become involved in the mission to combat police violence and systemic racism,” Wigfall says.

Juneteenth (aka Freedom Day or Emancipation Day) is in recognition of June 19, 1865, the anniversary of the emancipation of slaves in Texas.

“This is not a one time cause,” Wigfall says. “Fighting for what is right is never easy, nor is it an overnight fix. This group provides a place to engage respectfully and peacefully in an on-going dialogue  that aims to find ways to end systemic racism in America and encourage people to take action.”

OK millennial. Go ahead and commandeer our language. Tell us what we can and can’t say. Cheapen everything to make your point.

Sadly, that IS the millenial stance.
As teenagers we all rebelled against authority. It’s only this one generation thats being listened to because, and only because, dems know they can’t win without attempting things like lowering the voter age, allowing felons still in the system to vote and allowing people in the country illegally the right to vote.

I read both right and left news sources.

It’s only the left that are trying to rewrite historical and current laws to bolster their voting numbers.

Remember this, Democrats were the party of slavery, segregation and the kkk.

They are using minorities again to further their cause.

That must mean that you approve of democrats and their historical embrace of racism.

That’s ok. You just keep appeasing your white guilt with your newfound wokeness and complete lack of historical knowledge.

I’m surprised that in this day and age, with everything going on, someone would actually down vote this comment. I suppose there are people who would disagree but are only willing to admit that online.

Terryj, here is an analogy that may help you understand why using the “ALL” whatever counterpoint is insulting and misguided.
“If a house is burning down, you’re obviously going to focus on putting out the fire instead of watering a house that’s just fine. In this analogy, black lives are the burning house, and everyone else is living much more comfortably in the house that isn’t burning down. Clearly, one is a bigger problem.”

Nice pretzel logic. Twisting yourself into all sorts of positions with gibberish coming out. We don’t need your filter to explain a thing. I can think for myself, thank you. So now the word “all” needs to be taken away too. What words do you feel should then be left to say? Show us your thought police badge.

Black Lives? So your speaking for ALL Black people. That’s odd, their are a lot of Black People that disagree with BLM. Visit youtube and hear them out before you speak for them.
I do think ALL fires should be put out though. I am only speaking for myself , not ALL people.
Cheers

If you want people to pay attention to your delusional rantings, at least use proper spelling and grammar.

your making assumptions as usual. i don’t care if you pay attention or not. you and everyone here doesn’t exist, we are a phony guest member,with phony names. no more
Now,that’s the Truth

Glad they are doing this, and that terryj feels threatened by the fact the spotlight isn’t going to be on his kind, white face for a whole couple of hours. I also think it’s marvelous that someone named Wigfall works at a barber shop!!!

justice for all is controversial? Oh i get it, all you white privileged folks want to show your WOKE now. You have always stood with your Black brothers, right. I am happy for you.

Basket, you lost a deplorable!

Anything to appear woke. These people also took the ice bucket challenge, got “that tattoo”, drive “that Prius”, and all say and do all the correct things. Group thought.

“Anything to appear woke”

Well, appearing woke is certainly much better than appearing and/or being ignorant, bitter and close-minded like you and your other troll buddies here.

Kind of an oxymoron since “woke” has become synonymous with not having enough brains in your skull to think for yourself, instead following the latest trend in asinine liberal thought control.

“buddies” what do you have against women???

Women can be “buddies”, what do YOU have against women?

Nice job here, putting more words into peoples mouths. “Threatened” you claim. That what happens to weak kneed people when they see my Trump sign; they are threatened and hurt. BOO

West Woodland to Ballard is a pretty decent hike… any chance this can be shortened a bit, plus I dont want to have to walk back up hill aftewards… maybe Burke from Fremont to Ballard, like a reverse solstice. I might even show up naked and ride a bike.

it is like acne. POC marks left over from Chicken Pox.

Can anybody explain WTF the takeover on Capital Hill has a thing to do with BLM??????? Appears to me, and many, that this movement has been hijacked, corrupted and is in danger of losing focus. We are all essential PERIOD

“Give them Bread and circuses”
Juvenal, who originated the phrase, used it to decry the “selfishness” of common people and their neglect of wider concerns.[2][3][4] The phrase implies a population’s erosion or ignorance of civic duty as a priority.[5] translation for the slow, it’s all a charade. A man’s death at the hands of a Police officer was turned into a party. Most would be ashamed.

The moral primpers will be out in force on this one.

Not so much, since this is, well, Ballard.

Terry… this is racist

“Not so much, since this is, well, Ballard.” I like Ballard and i just spoke to my next door neighbor who is a friend, he is Black. When was the last time you spoke to a Black friend?

Terry, you’re being a stereotype when you start talking about your black friends.

you didn’t answer my question.
That was singular not multiple. Friend not Friends

stereotype 2: something conforming to a fixed or general pattern

you may be using the wrong word, unless you think i made up my Black friend and am a liar? enlighten me please

Terry, please google “ some of my best friends are black” and look through the history of people who have used that phrase to defend racist acts.

Terry, have you ever told your neighbor that you think it is a miracle more people don’t look like them in Ballard? How about telling them it is a miracle that more of their family doesn’t live here?

Let me guess, some of your best friends are black?

Thank you to Justice for Black Lives for organizing! See you Friday!

I am sorry. I have drifted away from my God these last weeks with my comments.
They were not rooted in Love.

I appreciate you saying this. We all struggle to be our best and it takes grace to admit our failures