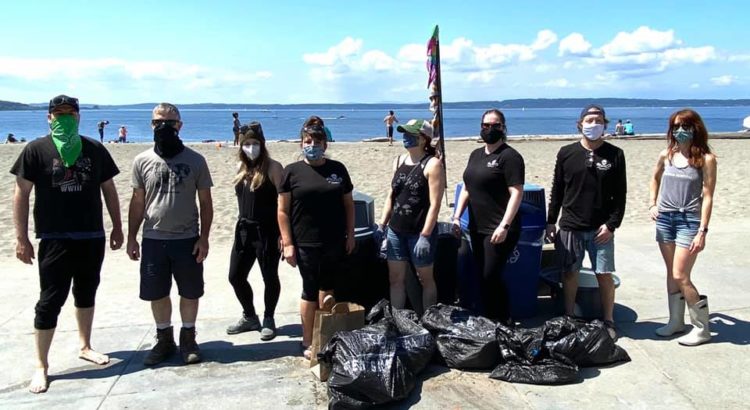 A group of 13 volunteers from Sea Shepherd Seattle cleaned up Golden Gardens beach and park on Sunday, collecting over 100 pounds of trash.

Spent fireworks made up a sizable portion of the trash, along with plastics, glass bottles, and cans.

“Despite the signs prohibiting fireworks in the park, it was very clear those signs were ignored,” Chris Joyce from Sea Shepherd Seattle tells My Ballard.

“As you probably know, fireworks cause extensive air pollution in a short amount of time, leaving metal particles, dangerous toxins, harmful chemicals and smoke in the air for hours and days. Some of the toxins never fully decompose or disintegrate, but rather hang around in the environment, poisoning all they come into contact with. We wanted to keep these contaminated items from going into the Puget Sound, only to be digested by marine life.”

Joyce says the chemicals and plastics can find their way into forage fish, which are eaten by salmon, which are then eaten by the critically endangered Southern Resident orcas.

“As we cleaned the beach, we received many “thank you’s” from beach goers but we had to shake our heads as we saw these people literally surrounded by trash, not making any effort to at least clean the area where they were sitting,” Joyce says.

Sea Shepherd is an international organization that works to protect and conserve marine wildlife; their Marine Debris Program conducts beach/lake/waterfront cleanups by chapters all over the world, focusing on ocean plastics.

The Seattle chapter is usually active with regional conservation and cleanup events; to learn about upcoming events, follow along on Facebook or email the group at Seattle@SeaShepherd.org to be added to their newsletter.

Some cities have a giant vacuum cleaner that is used to regularly clean beaches. Thank you to the Sea Shepard volunteers for your work.

Could sure use a giant 1 of these for many parts of Ballard today. Plenty of shreds of human debris everywhere, in our faces, with NO guilt, NO shame, NO cares and plenty of time on their hands.

An article on selfless volunteers cleaning up a beach, but you can’t help yourself.

Just like these people who selflessly gave their time and effort to help clean up someone else’s mess and care for their community, you could give it a try as well and make the change you want to see. It’s actually a good feeling to give back to the community, and you might even make some friends. Or you can just continue to whine and complain about everything and everyone like you always do, and continue to be the village idiot.

Sea Shepard needs to up their game on their uniforms, I thought they were antifa; clearly not though, cleaning up instead of destroying things.

oh they try and destroy things they don’t like, especially if it is a Japanese Fishing boat.

Sea Shepherd defends marine life and ocean habitats, doing what governments can’t or won’t do. Sea Shepherd is opposed to illegal, unregulated and unreported activities on the ocean.

The Japanese are fishing legally in their waters. SS doesn’t like what the Japanese fish for
or that they are good at it. so they take it upon themselves to make their own law and attack the Japanese vessels, this is illegal. Want to save fisheries? don’t it the fish.
The Japanese live on islands surrounded by the sea. Do the math. They don’t have enough land to grow beef for the masses. But, if they did some would complain about that as well.

So now that all your advice and predictions about COVID have been demonstrably false, you’ve taken to criticizing selfless volunteers?

While sea-pirate (see the video of them illegally boarding a Japanese boat, then claiming they were held “hostage”) is busy picking up my fireworks and beer, WSF runs over a humpback in Mukilteo, where’s their priority? They’re the antifa of the sea.

Re-read what you wrote, you’re actually the joke. Antifa is not even an organization at all, and Sea Shepherd is an organization that selflessly fights to protect sea-life from greedy corporations who do not care about life, just profits.

How do you know that Japanese fishermen belong to greedy corporations?
The Japanese have to eat just like you do. do you eat seafood?
There are 360,000 humans born EVERY DAY, they must be fed.
China is a huge fishing industry right behind Japan. Why don’t SS ram the Chinese Boats. Simple they now the Japanese are easy targets. The Chinese would blow them out of the water, so they only care about Japanese fish.They pay their mortgages from your donations. Please support them if you feel so strongly.

stop leaving your trash lying about

I just wonder how someone gets to that point in their life where they believe an angry man on the radio, who is paid to lie to them, over medical experts, multiple media sources and their own two eyes.

You clearly got…issues, and I hope you find what you’re looking for.

Who is this “man in the radio,” is that the voice in your head?

I get my info from the King County Public Health COVID data dashboard; and yes, hospitalizations in King County are also flat despite the dramatic increase in cases… explain that Dr. Jeckyll.

Great, at least you’re wearing a mask then!

OMG people ignored the signs. Here? In Seattle? Really? A stop sign to me is now a mere suggestion, thanks to the mobs. My parents were kidding when they told us to “go play on the freeway” back in the early 70’s. It’s so obvious that nothing is illegal, until you get caught. Perhaps another tent city can soon move to this area. They’re so cute and never a mess.