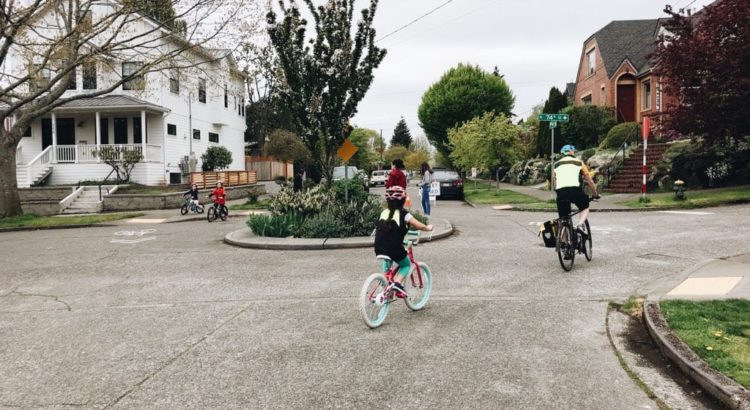 Seattle now has 27 miles of city streets closed for recreation, and the City has launched a survey to determine which streets should be permanently closed to thru-traffic.

Last month, Mayor Jenny Durkan announced that 20 miles of Seattle’s Stay Healthy Streets would be made permanent. Before determining which streets will be permanently closed to thru-traffic, the Seattle Department of Transportation is collecting feedback to see how residents are using the current closed roadways. They’ve created an online survey to gather input, which will now be open until July 22.

The current Stay Healthy Street in Ballard is on 17th Ave NW between NW 58th St and NW 89th.

The streets that are chosen for permanent closure will have signs installed at each intersection. In a blog post, SDOT says they want to work with each neighborhood, “to understand how the streets could become part of the neighborhood character.”

“The survey will inform the public engagement process and our goal of centering equity. If we truly want Stay Healthy Streets to be welcoming for all communities, then ‘we’ must include everybody. It means understanding cultures that have existed in the neighborhood. It means valuing everyone’s voices and finding ways to include them. It means everyone feels safe traveling on our sidewalks and streets. It means recognizing racism and becoming an ally. ”

Maybe they can turn Shilshole into a Stay Healthy Street??? https://www.seattletimes.com/seattle-news/transportation/seattle-cant-uproot-ballard-railroad-tracks-to-complete-burke-gilman-trail-judge-rules/

I am opposed to closing the Golden Gardens Drive. Although it may be fun for some bicyclists and walkers, it denies those with disabilities and the elderly any access to the Dog Park. With it closed now, the access is limited to descending or ascending a long, steep flight of stairs which is unreasonable for some and impossible for others. Indeed, during Covid-19, the stairs break the mandated social distancing rule because you pass very closely together. Opening the Dog Park parking lot would be alot safer. Parking is not available at the top of the 85th St stairs nor at the bottom by the railroad tunnel. Opening the Dog Park Parking would be alot safer and allow access for the many who cannot now get to the park. The City might also consider opening the road and the Dog Park during the week and closing it on the weekends. At least this compromise would be much more equitable for all. Regardless, I say we make no permanent decision until Covid-19 is under control. Of course people are using the streets now for outdoor time-They Cant get to the Parks!!

No doubt. I’m sure spastics will layer up soon.

Agree entirely. Seattle already offers less dog park space than comparable cities. There are more dogs per capita in the city than kids. To essentially close off access to one dog park to many (many people, and many dogs, can not handle those stairs) is unconscionable.