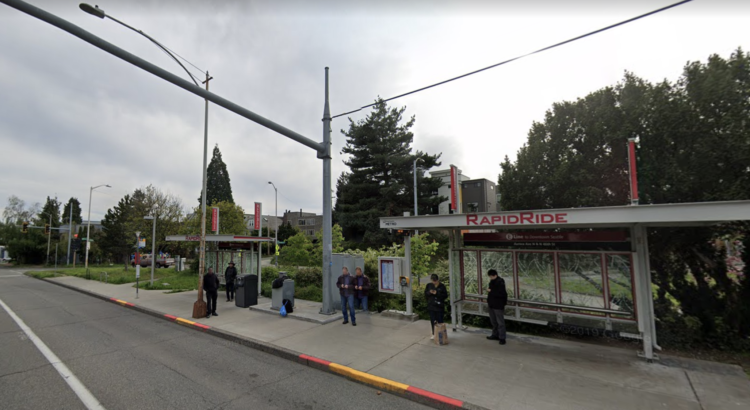 Update: Police say a suspect was arrested Thursday morning downtown by patrol officers. “Following up on a bulletin issued by detectives, officers located the 41-year-old male suspect downtown and took him into custody,” SPD reports. Officers recovered a gun, interviewed the suspect and booked him into King County Jail.

Original: Seattle Police are investigating a fatal shooting of a man Monday night at the bus stop on Aurora Ave N at N 46th St.

According to the SPD Blotter, police responded just before 10pm on Monday to reports of a shooting. They found the adult male victim on the sidewalk—officers performed CPR until Seattle Fire took over. The man was declared dead at the scene.

Witnesses told police that the victim was arguing with another man at the bus stop when the victim was shot. The suspect reportedly fled on foot. A search of the area was inconclusive, and police are still searching for the suspect.

In case this is more helpful in identifying a suspect, the police scanner mentioned the alleged suspect was a Black male, 20s-30s, dreadlocks and wearing a white shirt. This might be helpful in case you might have seen someone fitting this description in the area.

The people hurt most by the city council ARE and will continue to be people of color and or working class folks. A catch and release program is hardly constitutional, or good policy. Closing jails and eliminating bail is what our lame prosecutors bring to the show now too, so it seems becoming LA, Chicago, Baltimore, DC, etc IS job number 1. Umm, just who’s running EVERYTHING here? I’m still waiting for Inslee to say word 1 on the demise of Seattle. Nobody in any media is pushing him whatsoever, that’s why he’s silent. Biden said NOTHING either. NOTHING.

Maybe we need to wait for Seattle’s actual demise for him to comment on its demise?

Ride that Bus Line at your own Peril. Many ugly riders, going somewhere.

Just rode the bus today, and I agree. Time to start charge bus fares again. Keep the riff-raff away.

sorry Cap. Homeless NEVER PAY, metro won’t force them, afraid of confrontation. This has been this way for several years. We live in an area run by people where laws don’t mean as much as they should.

LOL. Right, and “peaceful protesters” will begin to help senior citizens and work at food banks next week too. These mobs will lay down all their ammo, get jobs, and become good tax paying citizens. The REAL and true riff-raff are the people you helped select to run this city.

How do you know who Cap voted for Paintking?

All of his human interactions seem to be reduced to some bizarre version of political tribalism where he assumes that those that he disagrees with must be part of the other party and therefore he despises them.

He’s kind of a caricature of our current political climate.

And it makes no sense because Cap is also not pleased with a busload of junkies. He AGREES with Paintking but Paintking seems to be suggesting he thinks Cap is a closet Inslee/Strauss voter. It’s all too much to keep track of.