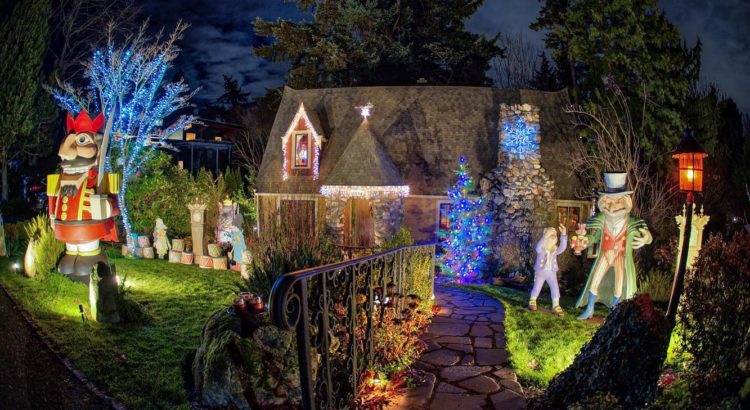 The annual Nutcracker Christmas display is back for its sixth year, but this year, the organizers could use some help keeping it going.

John Carrington and Scott McElhose, along with help from their neighbors, take pride in setting up the larger-than-life Nutcracker display each Christmas season. This year, a neighbor has set up a GoFundMe campaign to help Carrington and McElhose pay for the costs of the display.

Carrington, who is a harpist in the Pacific Northwest Ballet Orchestra, has collected the pieces over the years after the Maurice Sendak Nutcracker was replaced by the George Balanchine version. The PNB donated most of the figures, but Carrington and McElhose purchased the signature piece—a 15 foot, 700 lb. Nutcracker—from a private owner.

Due to the pandemic, Carrington has been furloughed from the PNB. As a freelance musician and harpist, he relies on orchestra performances to make ends meet. Normally at this time of year he’d be performing up to 40 times per month. He says his music season runs a similar schedule to a school calendar, with seasons finishing up in June.

Given the current state of the pandemic, Carrington doesn’t expect to be back in the orchestra until next fall.

“That is a year-and-a-half off of work for me as a self-employed artist. Other usual streams of income for me playing solo for large events, choirs, churches, weddings and movie soundtrack recordings are essentially not happening,” Carrington tells My Ballard.

His only income now is from virtual harp lessons with music students. Carrington’s partner McElhose is also self-employed as a woodworker and antique restorer; he too has been financially impacted by the pandemic. Carrington says they’ve been getting by with unemployment and mortgage forbearance, but that’s ending soon.

“We hope we can stay in our home,” Carrington says.

Carrington’s neighbor Julie VanWallendael launched the GoFundMe campaign to help him pay for the expenses of storing and maintaining the Nutcracker display. He says the majority of the costs come from annual storage fees, ongoing fiberglass repair, air-brush painting of the 40-year-old figures, and renting a flatbed trailer to transport them back and forth from the storage unit. Electrical costs also add up, along with the extra lighting, timers, extension cords, and spotlights, Carrington says.

“It has always been our gift to the community and we enjoy seeing all the visitors and especially the expressions and laughter of the children,” he says. “Our neighbor surprised us with launching a Go Fund Me page this year because of our financial hardship and we have been overwhelmed with the response and generosity.”

As of Thursday morning (Dec. 10), the campaign has raised $3,165 from 67 donors. If you want to check out the display in person, it’s at Loyal Ave NW and Golden Gardens Drive NW*, and will be up until the first week of January

“Our Storybook house is having a storybook moment –  I feel like George Bailey at the end of ‘It’s A Wonderful Life,'” Carrington says.

*Correction: location has been updated