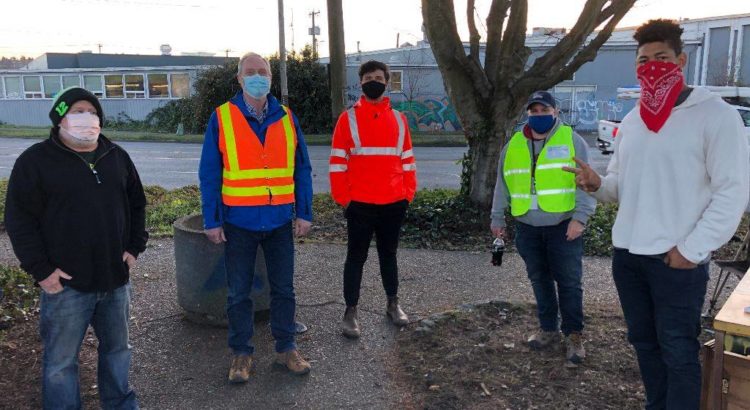 According to Seattle Compassion volunteer Ted Dubinsky, there are about a dozen or so people living at the Triangle who are using it, and at least a couple of nearby RV residents.

Dubinsky told My Ballard that he, along with charity founders Eric Duechle and Christina Duechle, chose the Leary Triangle for the toilet installation because they thought it wouldn’t get much pushback from the community and that it would help the folks living there.

“We were talking about installing one at the Ballard Commons, but we felt we wouldn’t get community support there. Leary was a better choice,” Dubinsky said.

Seattle Compassion has an ongoing fundraising website—the money raised on their Fundrazr site goes directly to help pay for the port-a-potty’s service fees and to empty the dumpster. Dubinsky says it costs $500 per month to keep both running.

Since it was installed in early December, Dubinsky says it’s been going well. He says they are in regular contact with at least four or five people who regularly live at the Triangle, and says there’s one resident who has taken some governance over the site, helping organize the port-a-potty installation and providing feedback for the charity group.

“They said helps a lot to have the toilet there,” Dubinsky said, adding that before the portable toilet was installed, the Triangle residents were using toilets at the nearby 7-Eleven and Trader Joe’s.

“This seemed like a win-win so they don’t have to go to nearby stores,” he said.

Officials from the City of Seattle were present for the installation, and the charity is retroactively getting permitting to keep the toilet on site.

“The City’s attitude is, ‘We’ll take all the help we can get,'” Dubinsky said.

Along with the portable toilet and dumpster, the charity has plans to raise money for a new generator for the Triangle residents. Dubinsky said they had one, but it recently broke. “A generator costs $1,500, so it may take a while to raise the funds for that.”

They’re also looking into small housing structures to include at the site, but the cost, permitting, and logistics are still being investigated. The charity would like to include a wash station, but it will likely be April before they can get it installed.

Dubinsky said he hopes to use his medical connections to get mental health assistance to the residents there: “Everyone living in the Triangle mentioned the mentally ill people there, and how nervous those people made them,” he said. “If we could get medications for those people it could make a big difference quickly.”

If you want to make a charitable donation to Seattle Compassion, visit their website and Fundrazr campaign page.