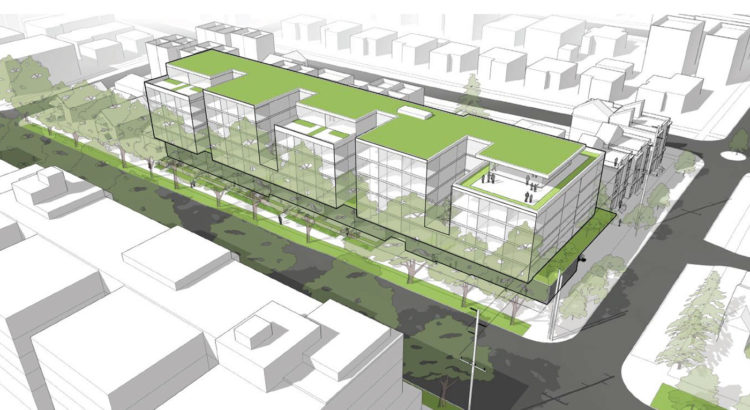 Plans have been updated and an early design review meeting set for the massive apartment block coming to the corner of 9th Ave NW and NW Market St in Ballard.

According to the Seattle DJC, FA Johnson Development is planning to buy and redevelop the site which includes seven residential homes. The selling price is just under $8 million.

The original plans called for 5 stories and 130 units; that’s been updated to 6 stories and 150 units. The mixed-use project will primarily focus on larger one-bedroom, one-bedroom plus a den, and two-bedroom units.

The plans call for about 3,000 square feet of street-level commercial space, a lobby, bike storage area, and fitness room. Unlike many large apartment complexes being planned for Ballard, this one has some parking in the plans: There will be between 60 and 90 parking stalls in an underground parking garage for residents.

The project site is within Ballard’s recently expanded Urban Village with new zoning changes which allow for taller development and reduced parking capacity.

According to the design packet, the proposed project, “aspires to be sensitive to the changing scale and evolving context of this stretch of Market Street, while providing a warm neighborhood experience to residents and visitors.”

The designers say they want the building to serve as an “anchor” to the east edge of the neighborhood and help provide “continuity for retail and commercial businesses along NW Market St stretching from 6th Ave NW all the way into the Ballard commercial core.” The project plans include conserving the line of oak trees along Market St.

The designers are Public47 Architects, set to present their design plan on May 3 in a virtual meeting. Other projects designed by Public47 include the June on South Lake and Shea Building on Capitol Hill.

That stretch of Market St will be undergoing some major changes in the coming years, with three other large complexes being planned within a three-block radius.

A 5-story, 235-unit apartment building is in the works just across the street, being designed by Skidmore Janette. No parking is in the project plans.

Down the street, a 7-story apartment building could replace the Firestone at 1145 NW Market St. The plans include 122 units with ground-level retail. Parking for 70 vehicles is proposed.

And just west of 904 NW Market St is the future site of yet another 5-story apartment complex at the current KFC location. The plans include 86 small efficiency dwelling units with no parking proposed.