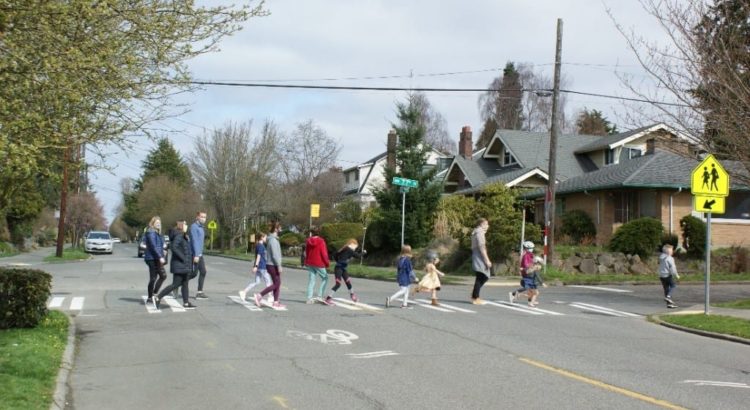 Today, students in kindergarten through 5th grade are returning to in-person learning, and SDOT is launching several street closures near some elementary schools.

In order to support schools that have requested limitations to vehicles driving around school entrances, SDOT has designated new School Streets that will be similar to Stay Healthy Streets and will provide more space for social distancing at school pick-up and drop-off.

The School Streets will be one or two blocks directly next to schools, and will be clearly marked with “street closed” signs. This means no thru-traffic will be permitted, and parents will be discouraged from driving or parking on these blocks.

SDOT says school buses and students with mobility issues will still be able to access the block, as will people who live or work on one of the School Streets.

With kids making their way to schools again, Seattle Police will be turning back on school zone safety cameras around the city this month which automatically send tickets to drivers who are photographed speeding. There will be lights flashing on the signs throughout the school day to help remind drivers to slow down.

Speed limits are 20mph near schools when children are present and long residential streets that don’t have a center line. Other streets are 25mph, unless there’s a sign saying otherwise. Keep in mind that SDOT  lowered speed limits throughout the city last year and on a few state routes.

As in-person learning returns, schools will be operating on new schedules with several new start and end times between 8am and 3:30pm, so be aware of children traveling to and from school throughout the entire day, and not just at the pre-pandemic start and end times.

One of the projects funded through the Safe Routes to School program is a new crosswalk at 32nd Ave NW near Loyal Heights Elementary School (pictured above).

A new Neighborhood Greenway in North Seattle is part of the Safe Routes program, which installed speed humps and other safety improvements to slow down drivers. The greenway starts at Whitman Middle School in Crown Hill and travels east along NW 92nd, north on 15th Ave NW, and east on N 100th St all the way to North Seattle College.

Schools, PTAs, and community groups are eligible to apply for a mini-grant to start a Safe Routes to School project. The grants will provide up to $1,000 to buy pedestrian crossing flags, support a student safety patrol, and help organize Walking School Buses, which is a group of children walking to school with one or more adults.