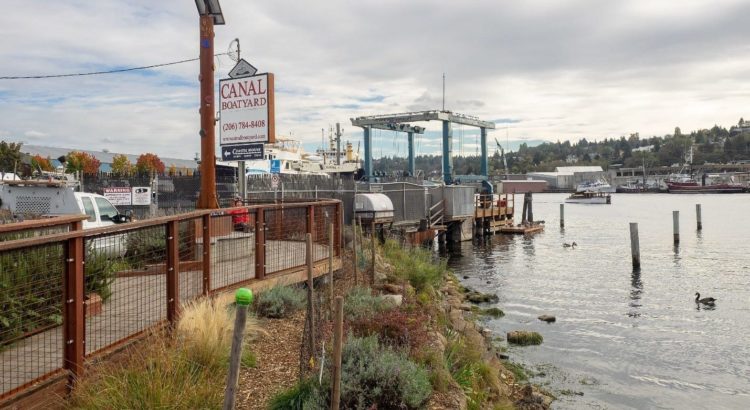 The Seattle Department of Transportation has several ongoing projects around the city to enhance shoreline street ends, including two in Ballard along the Lake Washington Ship Canal.

The projects are part of SDOT’s Shoreline Street End program, in which streets that dead-end near a shoreline are being revitalized for public use. There are 141 shoreline street-end parks around the city—check out this interactive map to explore street ends near you.

One of the Ballard projects is the street-end at 11th Ave NW (photo above). SDOT is performing erosion control at the small street-end park, where University of Washington Landscape Architecture students help design and build a deck for public use back in 2015.

However, since the 2015 upgrades, the shoreline has been “heavily battered and eroded by waves” from boat traffic in the Ship Canal. “If not addressed, the erosion would eventually undercut the footings supporting the deck structure above,” SDOT says.

SDOT started installing the first phase of “green armoring” in 2020 by installing coconut husk logs—also known as coir logs—along the shore. Crews also back-filled the area behind the logs with soil and deep-rooted plantings. Next year, SDOT will anchor driftwood logs to the bank to absorb additional wave energy to help protect the deck structure for years to come.

Another street-end project in Ballard is at 24th Ave NW, where Seattle Public Utilities is building a pump station as part of the Ship Canal Water Quality Project. The project is a joint effort between SPU and King County to improve water quality in Salmon Bay and Puget Sound.

Other street ends in Ballard that are open for access include a public boat launch and dock at 14th Ave NW (managed by Seattle Parks and Recreation), a kayak launch and seating at 28th Ave NW, and public lookouts at NW 60th St, NW 57th St, and 36th Ave NW.

Check out other street-end park improvement projects around the city on SDOT’s Blog.