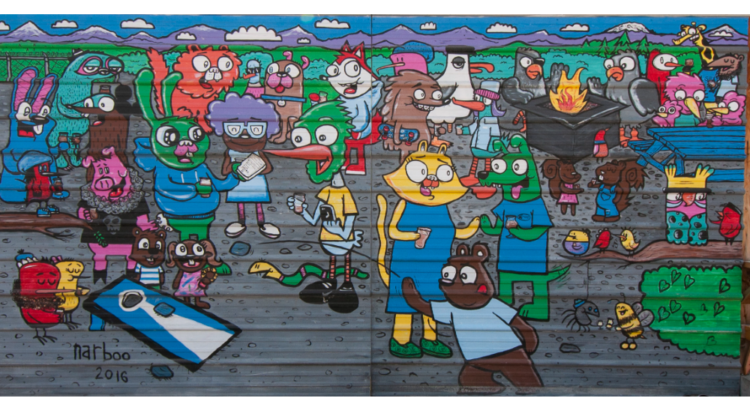 Yonder Cider and Bale Breaker Brewing Co. are auctioning off a narboo painting to help raise money for the Ballard Food Bank.

The mural will be recognizable for former Populuxe fans: The narboo painting was prominently displayed at the now-closed Populuxe Brewing taproom, which will be the eventual new home for Yonder and Bale Breaker. The artist, Brandon Michael Baker, painted the 8.5-foot-tall, 16-foot-wide mural in 2016 on two industrial-style garage doors at the former brewery. The auction ends today, July 28; you can click here to bid.

The artist told Brewer Magazine that he wanted the mural “colorful and full of characters”.

“I knew Populuxe was going to be a destination for families, locals and tourists and I wanted to showcase this in the piece,” Baker told Brewer Magazine. “It’s basically just all kinds of animals getting along having fun and making memories. That’s what life is all about. If I can bring a smile to someone’s face then I’ve done my job as an artist. The world needs more smiles.”

“Everyone seems to know this narboo painting and we love the message it shares,” Caitlin Braam, founder of Yonder Cider, told Brewer Magazine. Because of renovations, the painting will need to be removed to make way for the new Yonder/Bale Breaker collaboration. “…We’re just so happy it is able to be moved and auctioned off to benefit such an important local organization that has been so vital during these times.”

The Ballard Food Bank is currently in fundraising mode to help finish construction on their new location on Leary Way NW. Despite considerable support from individuals, foundations, businesses, and local government, they’re still bridging the funding gap to finish construction on their new building. Their current lease ends in October, and they need additional funding to get their new building ready for move-in.

The new food bank will be twice the size of the current location, and will include a garden, a large waiting area, and cafe for visitors. The warehouse will be 3,000 square feet and will have additional sorting areas and storage space, making programs such as the Weekend Food For Kids and Home Delivery easier for staff and volunteers to operate.

The Community Resource Hub will also expand with the new space, giving visitors more access to resources such as rent assistance, medical check-ups, case management, and VA services. The larger facility will allow the food bank to expand their services into more communities; Licton Springs to Bitter Lake and up to 145th St will be included in the new Ballard Food Bank service area.

The new Yonder/Bale Breaker joint taproom is scheduled to open later this summer at 826 NW 49th St. They’ll have over 30 taps of Washington-made beer and cider, plus regular food trucks and outdoor firepits. The location will also serve as a small-batch production site for Yonder and Bale Breaker.