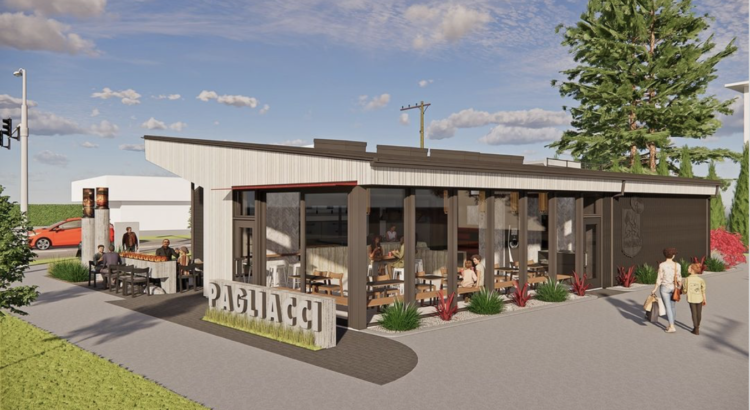 After 10 years at the iconic Totem House in Ballard, Red Mill Burgers has closed up shop to clear the way for Pagliacci Pizza.

Red Mill announced the closure on social media, saying their 10-year lease was up this year. “We loved running the Totem House these last ten years,” Red Mill shared on social channels. “We want to wish Pagliacci Pizza the best as they take over this unique location.”

Pagliacci owner Matt Galvin tells My Ballard that they’re planning on an “extensive remodel” of the existing Totem House. He says they’ll be adding more square footage for expanded dining, plus an improved workspace for Pagliacci employees.

Galvin’s other Ballard location in Crown Hill (851 NW 85th St) was just renovated, and he says that the added location in Shilshole will be great with all the summer traffic in Ballard.

“We have been delivering to the Ballard neighborhood for nearly 30 years,” Galvin said in an email. “We are super excited to expand and improve our operations in this awesome part of the City.”

The Totem House dates all the way back to 1939, and was originally built as a Northwesters’ Arts and Crafts Shop, according to a 2015 article on the Burke Museum website. Prior to Red Mill, the Totem House was a seafood and chowder restaurant—it was a staple in Ballard for 62 years but closed suddenly in 2010.

Red Mill took over the space in 2011 and was honored by Historic Seattle in 2012 for maintaining the Totem House and restoring the totem poles.

The history of the totem poles is somewhat convoluted: Past owners of the shop said that the front pole was carved by Jimmy John, “a well-known Nuu-chah-nulth carver from the west coast of Vancouver Island.”

However, the style of the front pole is Haida, and according to Bill Holm, curator emeritus of Northwest Coast art, and Dr. Robin K. Wright, Burke Museum curator of Native American Art, John was likely not the carver of the front pole, but rather the creator of the two corner posts that are now displayed inside the restaurant. They say those posts are carved in the Nuu-chah-nulth style, “characterized by the figures’ stepped flat oval facial planes, brows stepped up from flat cheek planes and eyes flat on the cheek planes.”

Holm said that the central pole is very similar to a model pole created by Zacherias Nicholas that’s held in a private collection, “which was possibly for sale in the shop at the time the frontal pole was carved.” The Burke reported that a 1939 newspaper article identified the main pole carvers as non-native employees of the shop, J. Houston and Leonard Porter. Dr. Wright says it’s likely the two employees copied Nicholas’s original pole.

Pagliacci will spend the next several months renovating the Totem House, with plans to open in spring 2022. It’s not clear how much of the original Totem House will remain after the remodel.