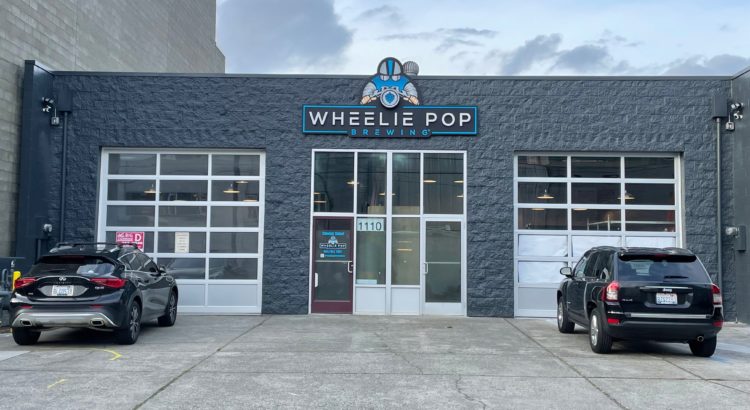 There’s a new taproom coming to Ballard this December: Wheelie Pop Brewing is set to open at 1110 NW 50th St in December.

Co-owners Jeremy Johnson and Mark Silverstein have been brewing beer together since 2017 out of Johnson’s Crown Hill garage while Johnson was working as a tunneling engineer and Silverstein worked in finance.

Brewing together out of the garage was their hobby, but they found it challenging to juggle their jobs with selling beer. So, they decided it was time to go full-time on Wheelie Pop, and are now joining the ever-expanding Ballard Brewery District.

Wheelie Pop is named for the owners’ joint passion: Motorcycle racing. It’s how they met and is what inspires their brewery’s name and underlying theme of the taproom. While they’re adamant that it’s not a motorcycle bar, “if you’re nerdy about racing, you’ll notice obscure racing references,” Silverstein said.

The owners have moved the brewery operation out of Johnson’s garage and into their new 3,000-square-foot Ballard taproom, which will feature six of their beers on tap plus cans, growlers, and kegs to-go. Johnson, the head brewer, said their beers will be on the lighter side, typically between 5 and 6%.

They expect to have a guest brewer in rotation, likely offering something they don’t specialize in, whether that’s a sour or a Belgian brew. Along with beer, they’ll serve a hard lemonade, a mixed Prosecco drink, hard Italian sodas, and a few non-alcoholic drinks.

Silverstein said they’d considered opening their taproom on Phinney Ridge, but felt drawn to be part of the brewery district in Ballard.

“One word I took away from meeting other brewers is ‘coopetition,'” Silverstein said, explaining that the vibe between breweries is a healthy combination of cooperation and competition. The brewery scene in Ballard has been welcoming, he added, because they all seem to recognize that more breweries opening means more business for everyone.

“We were hesitant at first to open in Ballard,” Silverstein said, adding that he worried that there may be a saturation point for breweries in the neighborhood. “But the flip side of that is, it brings more people into Ballard, which has become a true destination point in Seattle.”

Wheelie Pop won’t be serving food, but they’re partnering up with Trail Bend next door to make it easy for brewery patrons to order a meal from the Trail Bend kitchen. The brewery will seat 49, with additional outdoor seating opening up in the warmer months.

They’re planning to be open five days a week at first and will announce their schedule once they’re ready to open their doors. We’ll keep you posted.