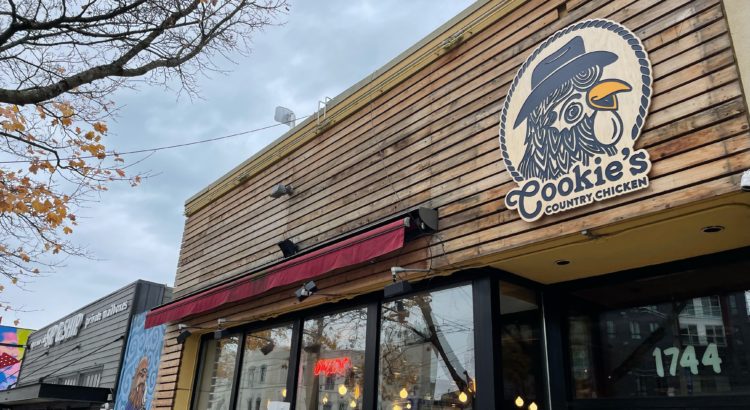 Owner Brian Chandler started Cookie’s two years ago when he began selling his recipe-perfected fried chicken at Mean Sandwich in Ballard. Since then, he’s been popping up in various restaurants around Seattle and ran a food truck out of Seabrook, Washington.

Chandler learned the art of fried chicken while working as chief steward on a boat in Louisiana.

Every Sunday night was fried chicken night on the boat—it was company policy, Chandler said.

“My first attempt at making it for an 80-person crew was a complete disaster,” Chandler said. “They all threw it away right in front of me.”

Refusing to accept defeat, Chandler worked hard on his recipe. “I dedicated time to learning. I wanted to perfect it. I wanted to be the best at making fried chicken.” He knew he’d succeeded when his crew began to tell him it was better than their wives’ or mothers’ recipes. They started calling him Cookie—that’s when he knew he was onto something.

“These guys didn’t usually give out compliments,” Chandler said.

After several years of working on boats, Chandler decided to come back to Seattle and become an entrepreneur. Starting Cookie’s Country Chicken was born from his desire to bring people together.

Before his time in the south, Chandler attended Seattle Maritime Academy in Ballard and spent time working on fishing boats. Ballard was home port and became his favorite part of Seattle. He was motivated to bring Cookie’s to the neighborhood, so when he saw a for-lease sign at 1744 NW Market St, he jumped on it. That was two months ago; he and his team wasted no time getting it ready for opening.

“We painted the walls, built a counter, cleaned, and added new kitchen equipment,” Chandler said. “But we’re bootstrapping it,” he said, using last month’s chicken sales to bring it to life.

“We believe it’s about the food,” he says. “Ballard has seen a lot of grandiose build-outs, but that doesn’t necessarily translate into food sales.”

Cookie’s serves fried chicken four ways: Bone-in, boneless, in a bowl, or in a bun. He has a cauliflower nugget option for vegetarians/vegans, and gluten-free options.