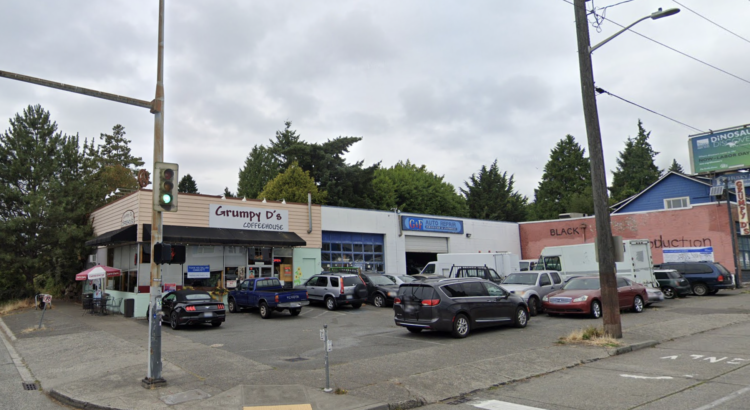 Update: Grumpy D’s owner Marta Kurtz tells My Ballard that they haven’t yet found a place to move. “They are all too expensive or too far away and [we] would need to start all over again,” Kurtz said in an email.

She says they have a call into a place off of 8th Ave NW and NW Market St, and another spot close by. We’ll update if we learn more.

The project plans have evolved quite a bit since we first announced the project: Back in 2018, Grumpy D’s received notice that they’d need to vacate their corner shop to make way for a five-story, 168-unit apartment building. But in early 2020, those plans were halted when the new property owner chose to change tack.

In early 2021, we reported that new development plans had been filed, which included a taller yet smaller building with six stories and 67 units. The neighboring G&F Auto Repair will also be displaced.

Now, the new development plans are moving ahead, with a virtual design review meeting scheduled for Jan. 24 at 5 p.m.

The updated design details aren’t yet available, but the size and scope seem to be fairly set in stone. The plans call for 29 small efficiency dwelling units, 38 apartments, and ground-floor retail. Parking for 26 vehicles is proposed.

Vivia Group is the developer, and Diagonal D is the architect for the project.

We’ve reached out to Grumpy D’s to learn about their plans and will update you when we know more.