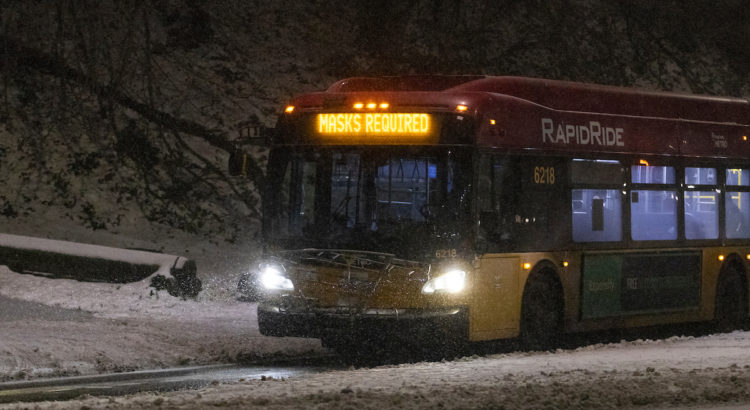 King County Metro will be operating on a Sunday schedule and on Emergency Snow Network routes only. Rides are fare-free from 4 a.m. Friday morning (Dec. 31) to 4 a.m. Saturday morning (Jan. 1). Metro says winter weather is still impacting their services, and that all passengers should dress warmly and allow for extra time.

Other fare-free Metro services are DART,Via to Transit, Ride Pingo to Transit, Community Van, and Access service. The Via to Transit will be operating until 2 a.m. on Saturday. Keep in mind that not all buses are running due to the snow.

Community Transit buses will operate on holiday schedules. For New Year’s Eve, buses and DART service will operate a Sunday bus schedule and will be fare-free from 4 a.m. Friday, Dec. 31, to 4 a.m. Saturday, Jan. 1.

Both Seattle Streetcars will operate fare-free on New Year’s Eve and operate regular service hours. The King County Water Taxi will not operate on Dec. 31 and Jan. 1.

Seattle Monorail is not included in the fare-free transit options and will collect the regular fare. It’s scheduled to operate from Westlake to the Seattle Center until 10:30 p.m. on New Year’s Eve. Service from the Center to Westlake will run from 12:20 a.m. to 1 a.m. after the events at the Seattle Center.

On New Year’s Day, all transit services will be operating on normal Saturday schedules, with the potential for continued snow network routes only.