By Kelsie Mhoon Luke McGuff had three simple rules for the volunteers at North Beach Park: “Be safe. Have fun. Get some work done.” The volunteers. McGuff on the far left. On Saturday morning, 11 volunteers came together to help clean up the 10-acre wooded ravine in Ballard, just across the street from North Park […]

Volunteers with Ballard Church are looking for neighborhood projects. This Sunday, a couple dozen people will roll up their sleeves from 1 to 5 p.m. and will do anything – yard work, paint, haul stuff, clean, etc. “We truly want to make a difference in our world by loving and serving our neighbors,” the website […]

When a seal or sea lion makes its way to one of our beaches, Seal Sitters is one of the first to be called. With pupping season in full swing, rookeries and pups have already started visiting Seattle beaches. “Golden,” an injured sea lion at Golden Gardens in 2010 who died days later. On Saturday […]

Volunteers through the new Ballard Church are ready to roll up their sleeves and get to work. This Sunday, about 20 people are available from 1 p.m. to 5 p.m. for various service projects at people’s homes or in the neighborhood. “They can help clean, paint, move heavy stuff, move peoples house, load trucks, yard […]

Reposted: With SeafoodFest a little more than two weeks away, organizers are still in need of volunteers. This year’s weekend event will be held July 9th & 10th. The crowd at SeafoodFest 2010 Volunteer opportunities include – help with set-up and tear-down, selling raffle tickets, being part of the “green team” for recycling and trash, […]

Interested in weeding gardens, raking leaves and picking up litter, all for a good cause and all in your own neighborhood? The Seattle Public Library is recruiting volunteers to help maintain the garden and grounds at several branch libraries, including Ballard (5614 22nd Ave NW.) Gardening at the library is an opportunity for friends, family […]

Ballard High School grad Chris Kaimmer spent the past year in Mtubatuba, South Africa volunteering with Grassroots Soccer, a non-profit that uses soccer-based activities to teach South African kids about HIV/AIDS. Tonight he’s sharing his story. Kaimmer and Mtuba Football Academy players. We wrote about Kaimmer this past spring because of his work to get […]

You read the headline correctly, the Ballard SeafoodFest will be held on July 11th & 10th. We reported earlier that the dates for the annual festival were changing for the first time decades, but what we didn’t know was that organizers were also changing the days around. The banner was hung on Tuesday afternoon in […]

Before 2005 Ballard High School grad Chris Kaimmer arrived in Mtubatuba, South Africa, young soccer players in the little town in the KwaZulu-Natal province didn’t have the right gear for the game. 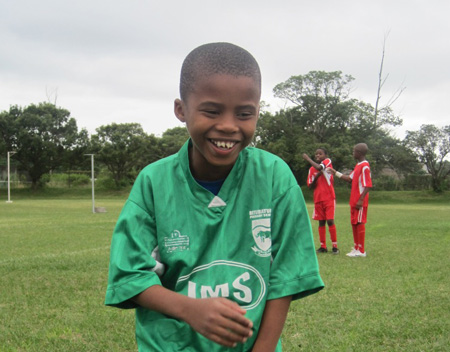 A Mtuba soccer player in a borrowed green jersey.

Kaimmer is a volunteer with Grassroot Soccer, a non-profit that uses soccer-based activities to teach South African kids about HIV/AIDS. He also volunteers as a coach with the U-10 team at the Mtbua Football Academy. Kaimmer, a soccer player himself, started playing here in north Seattle, played varsity for BHS and went on to play at Yale before graduating last spring. 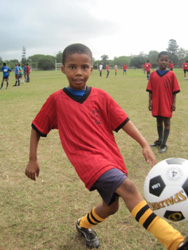 “When I first started coaching at the academy, I noticed they really lacked even basic equipment, especially for the level of soccer these kids are playing at (true talent out here and committed coaches),” Kaimmer says. The eight and nine-year-olds he coaches wore often unwashed green jerseys lent to them on game days by the primary school. “Although this was a fantastic situation for any of the Sounders fans among the MFA U-10 squad,” Kaimmer says, “it was actually really embarrassing for the boys because the official team colors are Red, Royal and White and they were the only team in the Academy that didn’t have the right gear.”

Kaimmer contacted his soccer friends back home in Ballard and the response was overwhelming. “Gear that’s old or unwanted back home can get so many more seasons’ mileage over here,” he says. We “ended up getting a huge amount of viking ship-emblazoned Ballard Youth Soccer Club jerseys, goalie jerseys, gloves and soccer boots donated to the cause and dropped at my folks’ house. Then one of my old coaches from the BHS soccer team, Dan Shiels, did a fundraiser to raise money to ship all that stuff down here to South Africa.”

The annual Ballard SeafoodFest is just around the corner and organizers are looking for volunteers. The crowd at SeafoodFest 2009 “We are looking for help with set-up and tear-down, selling raffle tickets, being part of the ‘green team’ for recycling and trash, ice wrangling, music stage volunteers and working with children in the Kids Zone.” […]

On May 1, Ballard Commons Park will be home to “BURP” a new day-long community event sponsored by the Ballard Chamber of Commerce. BURP is short for Ballard Urban Picnic. Mobile food wagons such as Skillet, Parfait Ice Cream, Anita’s Crepes, Veraci Pizza and Dante’s Inferno Dogs will converge on the park for the noon […]

A group of volunteers helped Groundswell NW spruce up and plant new vegetation at the Salmon Bay Natural Area over the weekend, through several bouts of heavy rain. Liz emailed us and said that although the group got wet and muddy, they had fun and got a lot done. “We started the morning with litter […]