Luke McGuff had three simple rules for the volunteers at North Beach Park: “Be safe. Have fun. Get some work done.” 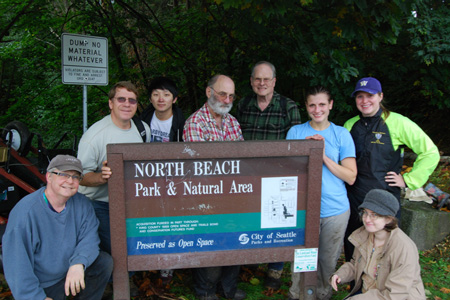 The volunteers. McGuff on the far left.
On Saturday morning, 11 volunteers came together to help clean up the 10-acre wooded ravine in Ballard, just across the street from North Park Elementary School, as part of an ongoing effort to renovate the park. Although it was marked as one of 30 protected areas in 1993’s Green Space Policy, little had been done to restore the ravine until members of the community, like McGuff, took initiative. 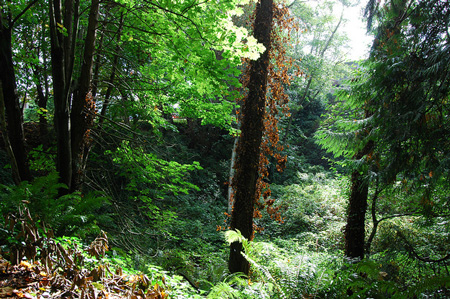 A look at the ten acre park

McGuff first took interest in the park when he and his wife moved to downtown Ballard three years ago. As a photographer, McGuff was intrigued by the pieces of metal junk strewn all over the park and peeking out of the snow, the bare trunks of the trees towering above them. As a lover of nature, he was less enthusiastic about the debris. McGuff contacted the Seattle Parks Department, and after much persistence, was allowed to organize a group of volunteers to begin work. 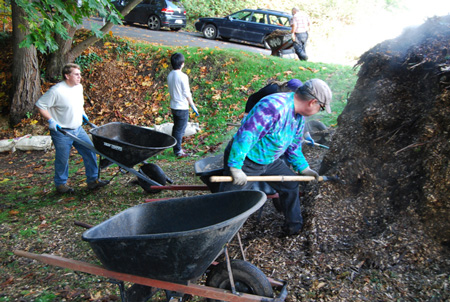 “Even before I contacted them,” McGuff said, “there had been a huge amount of interest in working on the park.” The monthly work parties started in April of this year and McGuff has been very appreciative of the active support from the community.

A tight-knit group of regular volunteers have committed to restoring the park. Selena Carsiotis, who has lived in the area for nearly 20 years, volunteers at several parks around the city and is particularly invested in the project at North Beach. The only major setback, she says, is the lack of involvement from the Parks Department itself.

“It’s great that so many people want to get involved to improve the natural settings,” she said, “but wouldn’t it make sense to teach them how?”

Still, even without paid professionals looking over their shoulders, the volunteers are passionate about improving this neighborhood oasis, one that’s already come such a long way from being an overgrown dumping ground.

Although the park may remain a mystery to some, the progress made by the work parties has not gone unnoticed. On Saturday, a group of women on a power walk sunnily offered their gratitude to the volunteers: “Looking good, guys!” “Nice work!”

Last weekend, the work party was primarily concerned with the removal of ivy, which makes the ground unstable and unsuitable for the survival of other plants. Volunteers pulled up the plant from along the trails and creek beds, and dumped piles of still-steaming mulch to fertilize the soil, reduce erosion and help ward off the resurgence of weeds in cleared areas. 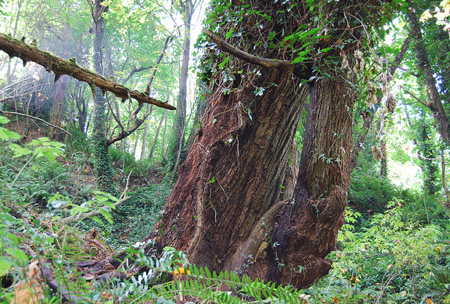 Others worked to free trees, some of which could be over 300 years old, from the ivy coiling up their trunks like snakes. To do this, the roots of the ivy must be dug out and the stems dangling down cut through at the base of the tree, effectively killing the plant. When the ivy is cut away, the bark of the great maple trees is finally visible again. These new bald spots are called “survival rings” (shown above.)

While removing undesirable plants may seem as straightforward an objective as any, the volunteers still have challenges to face. Sometimes, it can be tricky knowing just how much to clean up. Luckily, most of the larger items that had been thrown into the ravine years have already been removed, such box cars, play houses and washing machines. 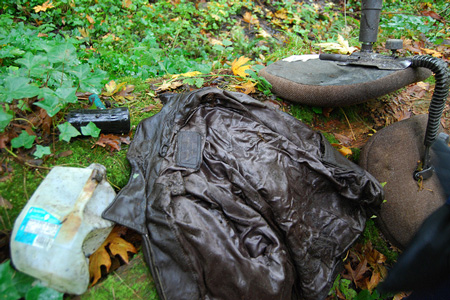 On Saturday, a car tire, an office chair, and a vast variety of cans and bottles were carried away from the depths of the park.

“This just makes you want to stop using plastic,” Carsiotis said as she pulled a warped milk container from the mud.

Other household and industrial items, however, seem to have become permanent fixtures of the ravine. Huge metal barrels lie half-buried in the soil, their sides now home to a variety of moss and fungi. 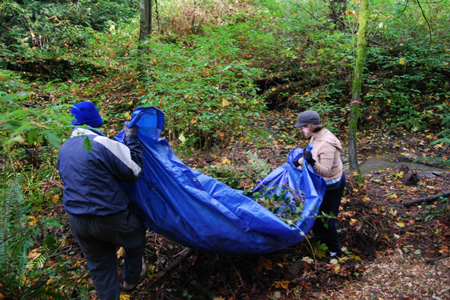 “It’s better to let some stuff lie in there,” McGuff said, explaining that trying to dig out every last piece of garbage can potentially do more harm than good, particularly when considering the dangers of erosion. This is one thing volunteers must be mindful of at all times.

“Social trails,” or trails made simply by walking, are partially to blame for soil weakening and some slopes becoming unstable. To ward off the danger of landslides, the group is doing its best to minimize the use of these trails and eventually install pathways, properly planned out and built on sturdy land. Also key for ground control, McGuff said, is continuing to weed out invasive plants and growing a diverse array of native plants and trees in their place.

If the park was left alone, McGuff said, “in 50 years, there’d be nothing here but ivy, blackberry, and bindweed.” The landscape of the ravine would change dramatically, becoming much wider and shallower from the resulting erosion. Such a change would put the homes and streets on the perimeter of the park in danger of destruction.

“Nature and cities are really united, much more than we think they are,” McGuff said. “There’s no part of nature we aren’t influencing and no part of the city that is untouched by it,” which is why he considers it a responsibility for communities to take care of these urban forests.

Calling the ravine an “urban forest” is certainly appropriate. Once you’ve walked far enough down the path to lose sight of the road, you get the impression you’re out in the wilderness, out of the reach of bright lights and 45-minute commutes.

“It’s entrancing,” McGuff said with a smile. “Kids in the schoolyard can be yelling their heads off and 100 feet down the trail, you’d just hear the birds and the creek.”

The overall feeling of the place, from the cool, damp air to the smell of pine and soil, has a calming effect. Although much work remains to be done, the sense of peace is one that the volunteers enjoy and will continue to strive tirelessly to maintain. Not just for themselves, but for the community and those kids in the schoolyard across the street.

The final work party of the year is scheduled for November 26 from 9 a.m. to noon. Anyone interested in volunteering (or learning more about North Beach Park) can contact Luke at lukemcguff@yahoo.com.

(Contributor Kelsie Mhoon is a student in the University of Washington Department of Communication News Laboratory.)