With about 50 homeless people living in their cars in Ballard alone, Sustainable Ballard wants to set up car camps at local church parking lots. Each location would house 6 people and their cars as well as traveling hygiene stations with showers, sinks and toilets. Think of it as a tent city on wheels. “I think it’s something that would have to be done carefully with security in mind,” Rep. Mary Lou Dickerson told the Ballard News Tribune. “Ballard tends to be more welcoming to homeless people because a lot of the homeless are from our own community.” You may remember several months ago, a homeless man was beat to death in his truck at 48th and Leary. Police arrested another transient. 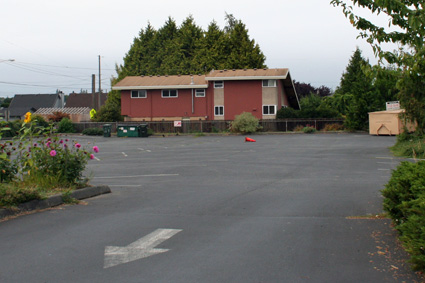 A prototype of a car camp and hygiene station will be assembled at the Our Redeemer’s Lutheran Church parking lot (above), where Ballard’s last tent city was located. But organizers say that doesn’t necessarily mean a car camp will be located there. A neighbor told KING 5 News (a story ran last night) that she hopes precautions are taken. “Who’s watching out for their safety and the safety of neighbors?” asks Joanne Laha. Sustainable Ballard hopes to have a prototype of the hygiene station at the Sustainable Ballard Festival.