Updated 11 a.m.: Seattle Police and Department of Fish and Wildlife officers spent most of the early morning hours trying to capture a small bear roaming the neighborhood. As first reported here on My Ballard, police first joined the chase near 15th Ave. and 77th St. just after midnight. The bear ran through yards and down back alleys. It climbed a tree, escaping just before officers arrived. 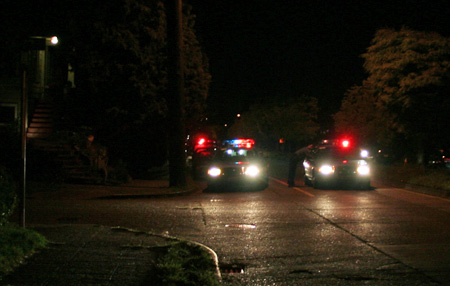 Wildlife officers were armed with tranquilizer darts and a tracking dog, and they told us to stay in our car as we followed the chase at a safe distance. (If you’re curious if the animal ran by your house, My Ballard reader Silver tracked the police calls in the forum here, which we used to create the map below:)

But the bear was too quick. By 3 a.m., it had disappeared in the area around 11th Ave. and 92nd St., and officers called off the pursuit. But two hours later, a resident spotted the animal at 133rd and Meridian.

An officer on scene early this morning told us they believed this is the same black bear that was spotted yesterday around Discovery Park, and that it probably made the swim over the Ship Canal to Ballard. The bear was last seen in Magnolia at 10:11 p.m., and the first sighting in Ballard was around 11:30 p.m. at 63rd and 24th. (Thanks Silver for helping with the story this morning!)

Update: We updated the map with new sightings provided by police.