Update 10 p.m.: The black bear that ran through the middle of Ballard early this morning made a stop Monday afternoon in Twin Ponds Park in Shoreline, temporarily closing the park to the public. But a half hour later, it ran south a couple blocks and hasn’t been seen since. Here’s the latest version of our map, which tracks the bear since it swam over from Magnolia:

Fish & Wildlife officials, meanwhile, have discontinued the search because they don’t believe the small bear is dangerous. The bear had quite a day, swimming across the Ship Canal from Magnolia into Ballard late Sunday night, criss-crossing its way through the neighborhood with police and wildlife officials in close pursuit with tranquilizer guns and tracking dogs. The bear disappeared for several morning hours — wildlife officials believe it was taking a nap — before heading sharply north into Shoreline. There, the media joined the chase (video), with TV crews on the ground and choppers swirling overhead. 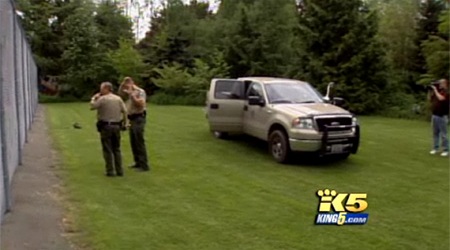 If and when Fish & Wildlife captures the bear, it will be “moved to where he belongs, to the woods somewhere,” said Sgt. Kim Chandler.

As is customary, Seattleites like to name our famous wildlife, so what would you name the bear? Post a few of your favorites in comments below…