A time capsule that was discovered during the demolition of the old Norway Center building on Queen Anne was opened at Leif Erikson hall on Sunday. 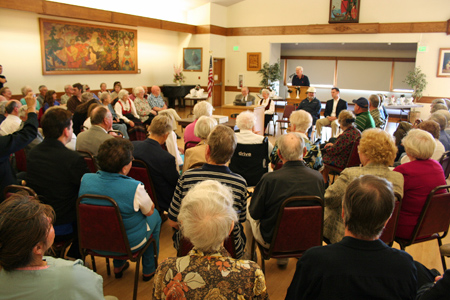 Tom Stang, retired consul of the Royal Norwegian Consulate, offered his memories of the Norway Center to the 100 or so people in attendance. “Friday I drove by the site, which is now just a hole in the ground. I can’t say I was sad, but… it was a lot of memories,” he said, fighting back tears. 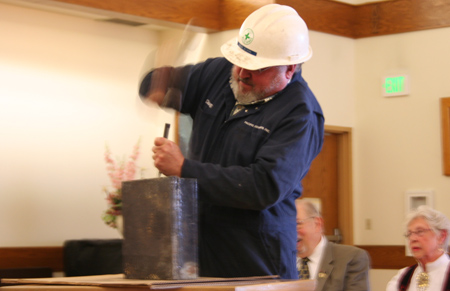 A few moments later, Doug Dixon from the Pacific Fishermen’s Shipyard began to hammer away at steel time capsule, which was welded shut. “It seems that our forefathers were serious about having a capsule that would be sealed from any casual attempt to view its contents,” said Russ Oberg, president of Leif Erikson Lodge. The crowd cheered when Dixon was finally able to open the box. 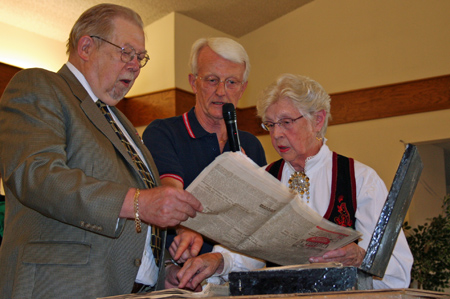 The first object pulled from the capsule was a copy of the Seattle Daily Times from December 29, 1950. “GM Closes 5 Assembly Plants in One Week,” was one of the headlines, which got a chuckle from the crowd. 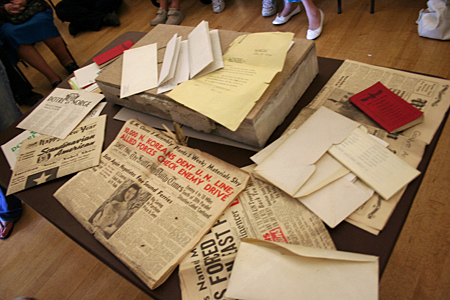 Also pulled from the steel box was a letter from the Daughters of Norway, several programs from the Norwegian Male Chorus of Seattle, the program from the dedication of the Norway Center, a letter explaining the history of Valkyrien Lodge #1, as well as several other newspapers and historical documents. There was not, as some had hoped, anything from Norway Hall, which was built in 1915. 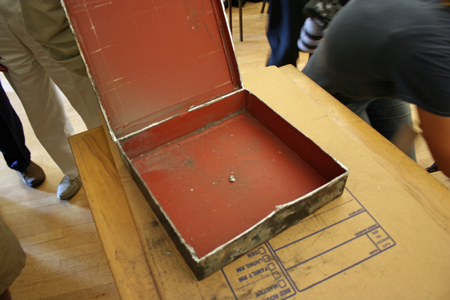 After the event, attendees were able to walk up and inspect the contents of the steel box, a flashback in time for a generation rich in memories.

man, time capsules are so cool.

Ah, I was hoping for something really off the wall.

If I remember correctly, the name of the restaurant at Norway Center was the Norselander. My grandparents always had the family gather there when relatives visited from Norway. It was pretty fancy.

Yay – That's what I was thinking too! Glad someone else had the same idea – and the same Looney Tunes upbringing!

Was there a hand written note saying 'condos suck!'?

i love how the crowd is all super old

Maybe they're looking for their keys…

oh man. my dad would have a good norwegian joke right now.

I hope they re-burry that time capsule and someone else can find it in another 60 years.

Sure it's all old folks. Did you hear about this being found? I sure didn't. If I had, I'd have liked to see it opened. I don't think they worked very hard to advertise this event. Ah, well.