Corky Luster always has projects going. Last year when his beehives did especially well, he decided to create the Ballard Bee Company and market honey. “I thought I would bottle it and start selling it,” Luster said.

Luster’s first sale was to Anne Catherine Kruger, chef and owner of A Caprice Kitchen. He was walking his dog by her restaurant one day and thought, “I’ve got to sell it to somebody.” 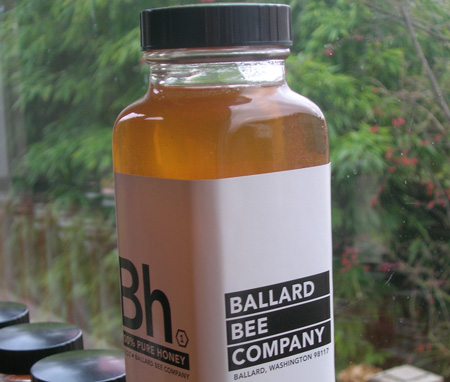 For the label, Luster “wanted something with a little more edge,” and avoided the typical country theme. Photo by Emily Fairbrook.

“It was so fortuitous. It just worked out,” Luster said. “She gave me the courage and positive energy to keep selling.” Kruger’s restaurant uses fresh and local foods, so when she discovered the Ballard Bee Company was within five miles she immediately got excited. “I think it’s really important to support other small businesses and farms,” said Kruger. “I can really tell the difference. The ingredients just shine all by themselves.” A Caprice Kitchen is located at 15th Avenue Northwest on Northwest 70th Street.

Recently, Luster’s honey has become so popular he’s had to turn down interested stores. Luster is selective because he harvests just once a year but supplies stores and restaurants year-round. “No big stores,” said Luster. “I want [Ballard Bee Company honey in] specialty boutique stores and places I go to. I want to support them.” 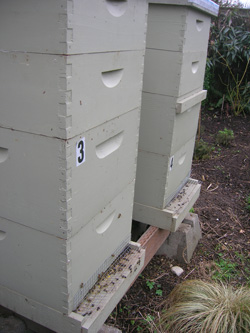 However, Luster plans on expanding. He’s building new hives and expects to have 40 this summer. He’s also planning on marketing comb honey in addition to extracted honey. “It’s going to be a big product next year,” Luster said in reference to comb honey. To get around having more than four hives — the legal limit for one yard in the city — Luster places hives in other people’s yards.

“Sponsors” get free hives on their property and are rewarded with a jar of honey and pollinated plants. Those who choose to lease a hive get all the honey at the end of the summer. Luster manages all the hives. This spring, Luster is adding more sponsors and just announced plans to place hives in the garden on top of the Bastille Restaurant.

As the Ballard Bee Company keeps growing, Luster is considering hiring an intern. “I’ll be really tough on who I pick,” Luster warned. “I’m going to make them learn the unglamorous stuff.”

For now, the Ballard Bee Company consists of Luster and his partner, Karen Percelle. “Our staff Christmas party is pretty quiet,” Luster joked. But Luster’s life is far from quiet. In addition to working full time for his remodeling company, he mentors other beekeepers, teaches classes at Seattle Tilth and is involved in the Puget Sound Bee Keepers Association. Corky Luster and Karen Percelle beside two hives in their backyard. Photo by Emily Fairbrook.

Both Luster and Percelle enjoy the community aspect of “urban beekeeping.” They believe it’s a great benefit to their yard, neighborhood and wildlife. They’ve noticed an increase of berries on their trees, and more birds and less bugs. “I think everybody should have bees,” Luster said.

One unique aspect of keeping bees in the city is the increased human interaction. Luster’s bees are gentle, and he constantly checks their temperament with his hands. Aggressive bees sting more so Luster knows when to split up a hive. Luster intentionally doesn’t wear gloves when he suits up so he can get stung.

“A lot of people push high productivity, but they can be defensive,” Luster said. “I have to consider neighbors. If there was an issue with allergies or aggressiveness I probably wouldn’t [have hives] here.” Luster and Percelle are thankful they have great neighbors who enjoy the benefits of bees. The occasional free jar of honey doesn’t hurt the relationship, either. 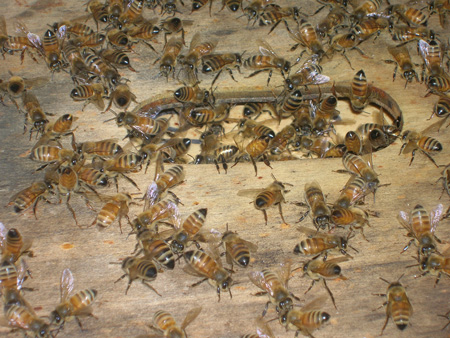 A close-up of the inside lid of a hive. In the summer, 60,000 bees live in one hive. Photo by Corky Luster.

When asked about the current honeybee scarcity, Luster said he hasn’t noticed anything with his own bees, but knows farmers who have.

To cut down on problems, Luster uses the Integrated Pest Management model and throws away bee supplies every three years. He also uses natural tricks such as sprinkling powdered sugar on the bees. This encourages the bees to groom each other, killing mites. “All these little things add up and we have healthier bees,” said Luster, adding that there are no proven solutions to the dying honeybee problem. 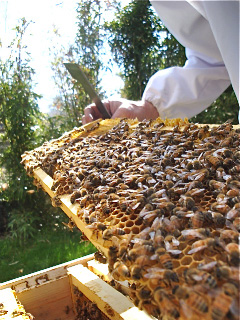 In the future, Luster and Percelle may move to a farm, but for now their day jobs are in the city.

“This is a great way to be involved in an aspect of it,” Luster said. For Percelle, it’s a perfect balance. She works at Nordstrom full time, teaches yoga and is “a part-time bee mistress.”

“I get to do exactly what I want to do,” said Percelle. “There are a lot of people trying urban farming — it’s nice to be a part of that.”

Here is a complete list of retailers that carry honey from the Ballard Bee Company.

Serious props for not going with the country-folksy style naming or labeling that everyone else does. I'm so sick of the whole “olde country bobs kettle corne” motif that everyone uses on their packaging/product marketing.

The more that can be done to abolish the country == healthy style of thinking, the better.

I like honey, and have always had great admiration for honey bees! That they can sting but are reluctant to do so, coupled with their harmonious production of honey leaves me with the feeling that balance and peace are a natural result of good deeds.

This is a really nice profile of someone in the neighborhood doing great things. Let's have more of these kinds of stories in the future!

This is fabulous! I love the buzzing little pollinators and hope to host one of their hives soon.

I LOVE A Caprice Kitchen, and could not get enough of Ballard Bee Company honey the last time I was there. It has the most fantastic floral taste to it- we were literally eating it off of our fingers!

Is Corky looking for additional hive sites? We might have a place.

Mmmmm! Comb honey on a thick, hot, home-made flour tortilla, like when I was a kid. Can not wait.

Ditto, great story Geeky Swedes, best one in a long time and I reallly enjoyed reading it.

Honey is derived from slave labor! Yes it might be “just bees” but their product is taken without fair compensation!

Anyone know how much a bottle of this stuff retails for? I've recently been on a raw honey kick and am always looking to try new ones.

Chef Anne Catherine is the best!

I agree with you and so would most vegans. Most people do not realize that bees are forced to make more honey than they need and many are killed at the end of the year. We have many other sweeteners that are available and we don't have to kill creatures to produce them.
Thanks for pointing out the “slave labor”

I have kept Bees in Ireland, many moons ago. Would like to lease/or whatever. Sign me up please. Frank Gowan

Seriously? Man. What a lovely story about a local guy doing something neat. Slave labor? Come on. I think it is offensive to human slaves to toss around this terminology.

“Many are killed at the end of the year”? Are the beekeepers killing them or is this a natural process? If it is the beekeepers, then perhaps you should talk to this beekeeper before making a general statement like this.

Boo on the buzzkill. I discovered Ballard Bee company at Honore last week and am thrilled for this new business and really appreciated the lovely article. Thanks, Swedes!

Just read the article and love the comments from everyone. Balgal great suggestion about talking to a beekeeper before making a comment that has no merit to it. But, I guess everyone is entitled to their opinion. For those interested in sponsoring a hive contact me by email or phone.

This is great. I pretty much stopped buying honey a while ago because of the articles about contaminated honey that were in the PI. http://seattlepi.nwsource.com/specials/honey/ I think my yard's too small to have a hive, but good honey in my tea would be so good!

FYI: Make sure to warn people to not give their infants honey. Honey contains endospores that can be VERY life threatening to them.

Actually, I thought about mentioning this correction, too! Caprice is located at the corner of NW 70th St & Alonzo Ave NW, a couple blocks east of 15th Ave NW. :)

I've kept bees before… In Ballard. Beekeepers do not “kill the bees at the end of the year”. At least not around here. I have heard of some beekeepers in extreme northern climes (e.g. northern Alberta, Norway) that more or less abandon the bees at the end of the season due to the lack of any success overwintering. Bees populations do dwindle in the fall – because the queen lays fewer eggs (in response to the changes in light and nectar flow) so that the colony (i.e. their genetic material) can survive the long period (we call it winter) when there is virtually no nectar flow. Also, “force the bees to make more honey”? Srsly? Do you believe this? Now, if you had said that humans have bread bees for thousands of years with the expressed intent to increase (SURPLUS) honey production, then I might agree. It's just like cows (which vegans have more issues with) – humans breed for more milk production. Sure, we also breed for other things, and beekeepers have done this too. Be(e) it disease resistance, pest tolerance, docile nature, less swarming, the list goes on and on.

What an awesome thing you're doing! Pick me! Pick me! I just sent you an email about sponsoring a hive.
Thank you!

Hi ObiWan,It was me who posted the message that you replied to and I was really just supporting “Name” who left the first message regarding the bee situation.However I will respond to your message as you appear to be one of the more rational folks on the message board.I will agree with you that most of the smaller bee keepers will not kill any of the hive at the end of the year but many of the larger “factory” bee keepers who supply up to 80% of the honey will cut back the hives in the winter as a cost effective measure.And as for the bees producing honey, as a former beekeeper you will know that bees in a natural state will produce enough honey for the hive to survive the winter, if they produce more the hive will split into two and then there are two hives. Would you agree that most beekeepers will take spring honey and many (especially commercial beekeepers) take the fall honey and then they feed sugar water to the bees to keep them through the winter. Now to me that looks a lot like stealing.Also domesticated bees are not necessarily the best pollinators, there… Read more »

I love those homophones, they trip me up often!
Time for a spelling “bee” maybe(e)!