Back in 2005 and into 2006, design work was started on the Crown Hill Elementary Park Development at Holman Rd NW and 13th Ave NW. Now the plans are being dusted off and the park will become a reality. 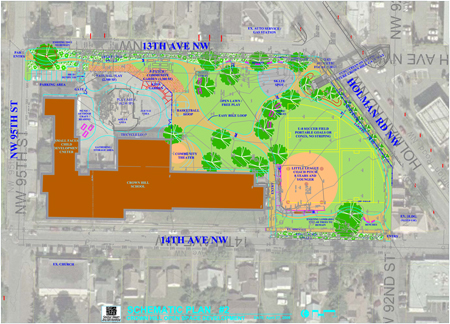 According to Kim Baldwin with Seattle Parks and Recreation, the plan is to pick up where they left off. They will take the comments on the three previous designs (here, here and here .pdf) from the 2006 meetings and come up with one preferred option. Elements being considered are pedestrian circulation, celebrated entries, open space, areas for play, a skate spot, a newly renovated field, seating and plantings, according to the Parks and Rec website. The project is being funded with $1,200,000 from the Parks and Green Spaces Levy. Construction is slated to begin in the spring of 2011 with a completion of fall of next year.

So glad to hear we’ll have a little skate spot in the new Crown Hill park!