Seattle’s newest fire station is up and and running on Crown Hill, a year after the facility’s groundbreaking at 8729 15th Avenue NW. It replaced the old Fire Station 35 which was built in 1920 at the same location for horse-drawn fire equipment. The old station lacked earthquake reinforcement. 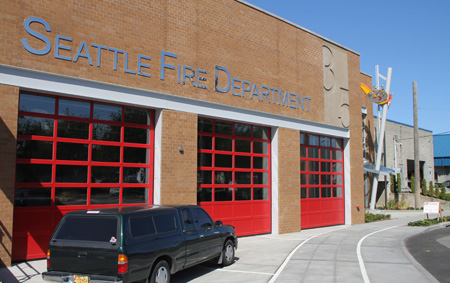 The new station is state-of the art, and a big upgrade for firefighters. “It’s dramatically different,” said Rich Hennings, the senior project manager for the City of Seattle. “The room, the exercise facilities, the privacy, the comfort level, the beanery is much better.” The “beanery” is the kitchen, and it’s one of the places where Hennings gave us a behind-the-scenes video tour: 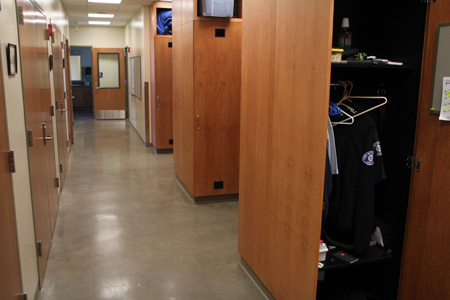 Sixteen total firefighters call Station 35 home, with 4 to a shift. Each firefighter on shift has a small bedroom slightly bigger than a closet. 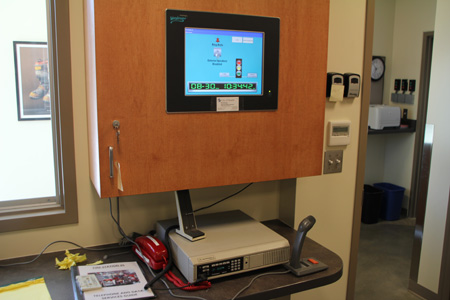 One of the features of the station is this control center, which allows firefighters to control the traffic lights nearby the station. 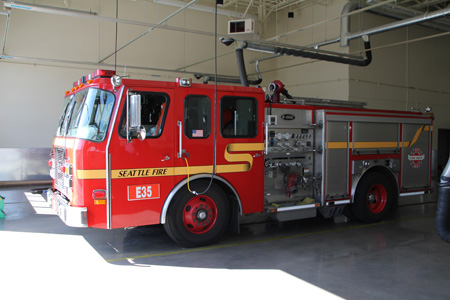 So where’s the fire pole? There isn’t one. “To install a pole now, it takes so many safety features, they’ve become very expensive,” says Hennings. “The response time is not dramatically different using the stairs versus a pole.” We were there when a call came in, and we watched a firefighter zip down the stairs in seconds. 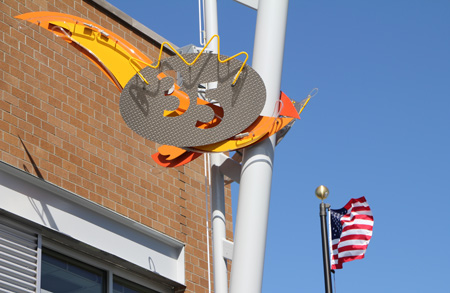 A sculpture called “Rescue” displays the number 35 outside the station. Created by local artist K. Kirkpatrick, it features an abstracted ladder and a neon flame, playing off the neighborhood’s 1950’s architecture.

Not only does the facility have more amenities — including a small outdoor deck with a BBQ — Hennings said it’s safer for the community. “If we ever have a major disaster, we’re going to be better prepared, by far,” he said. A dedication ceremony, complete with a visit by the mayor, is scheduled for next month.

When are they going to remove the temporary station in Crown Hill next to the Crown Hill School?

My impression is that they dispatch the closest available unit; in the horrible Fremont fire a few months ago, the Ballard Station responded first because the Fremont station was out on a call.

The dividing line between 18’s and 35’s is approximately NE 70th St, but Mondoman is correct that the dispatching system will dispatch the closest available unit regardless of who’s first in district the run is located in. Hope this helps.