Journalism students at Ballard High School say a proposal in front of the Seattle School Board violates their first amendment rights. They say the “new policy would remove student responsibility for content and set the stage for administrative censorship.” The proposal, which was introduced at the last School Board meeting, gives school principals the right to review student newspapers before they’re published. 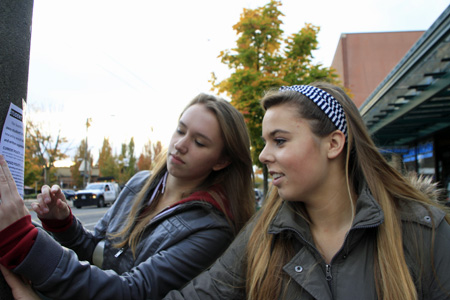 Kate Clark, the editor-in-chief of the Ballard Talisman, and Katie Kennedy, the managing editor, are furious at the proposal. On Friday, the duo spent their afternoon plastering downtown Ballard with these fliers (.pdf).

CURRENT POLICY: Students have the right to FREEDOM OF THE PRESS and may express their personal opinions in writing. They must take full responsibility for the content of their publications by identifying themselves as authors and or editors of the publication. They are not allowed to make personal attacks or publish libelous or obscene material. –Seattle Public Schools Student Rights and Responsibilities 2011-2012

PROPOSED POLICY: The principal may request to review any copy prior to its publication. Material must be free of content that: runs counter to the instructional program; is libelous; obscene or profane; contains threats of violence towards a person; invades a person’s privacy; demeans any race, religion, sex, or ethnic group; advocates the violation of the law or school rule; advertises the tobacco products, liquor, illicit drugs, or drug paraphernalia; materially and substantially disrupts the operations of the school; or, is inappropriate for the maturity level of the students. –Superintendent Procedure 3220SP

The students currently work with an adult adviser on the Talisman, and they can print whatever they want, using journalistic best-practices. They believe that if the proposed changes are approved, 80 percent of their content would be cut. “We challenge a lot of the things that happen,” Clark says. “We don’t want that right to challenge authority to be taken away from us.”

Students do have free expression, Teresa Wippel with Seattle Public School says, but the district can regulate some of what they write. This is a way, Wippel tells us, for the district to have a uniform policy on student publications. After checking with the district attorney, she says that because the students are working on school grounds, using school resources, this proposal is well within their rights on the state and federal level.

The Superintendent is authorized to develop guidelines assuring that students are able to enjoy free expression of opinion while mantaining orderly conduct of the school.

In order for a student publication or speech to be restricted for causing a material and substantial disruption, there must exist specific facts upon which it would be reasonable to forecast that a clear and present likelihood of an immediate substantial disruption to normal school activity would occur if the material were published and distributed. Material and substatial disruption includes, but is not necessarily limited to: student riots; destruction of propoerty; widespread shouting or boisterous conduct; or substantial student participation in a school boycott, sit in, stand-in, walk-out or other form of activity.

“The idea is, obviously, we want to educate future journalists on their rights and responsibilities,” Wippel says.

“How are we supposed to learn to be responsible when we’re not given responsibility in the first place?” Kennedy says.

Clark and Kennedy are encouraging community members to attend the next School Board meeting on November 16th. Wippel tells us that action will be taken on December 7th.

Hello, You are discussing very important topics about love. I like this type of information, Because I also love a mexican women, But I can’t direct purpose of this. So Fort this, I am looking for a dating site for meeting with this woman.