Through the front door, around the back, down, over, roll around. Repeat. It is a simple cadence heard from the corner of Aster Café in Ballard last Friday evening. 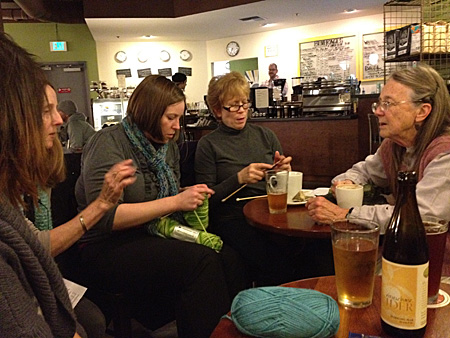 A neighborhood resident, Jody Grage, chanted it to help beginning knitters guide yarn around knitting needles. She sat with eight women, ranging from those who worked with challenging patterns to those who gave their sincerest effort. It looked like a regular knitting club but if you ask these women what they’re working on, they would reply they make clothing for the homeless.

“[Knitting] produces practical, usable things,” Grage said. “You can run the whole gamut with it.”

The group will donate its first batch of clothing to the homeless this coming Friday, after five months of knitting. Grage began the group as part of her efforts with Sustainable Ballard, a neighborhood nonprofit that promotes individual and collective sustainable living. Most of the knitters learned about the effort through online promotion and emails from Sustainable Ballard, even though active participation in the nonprofit is not required to knit in Grage’s group.

Toni Cross, a new knitter and member of the Ballard community, began attending the monthly knitting circle to continue her volunteer work for the homeless. After doing nothing but “throw money at the issue,” she said, Cross wanted to find a more visceral way to help while picking up a hobby. “My next door neighbor was a veteran crocheter,” Cross said. “She was so peaceful in her 90s because she always had something to do. I thought that was a good way to get old.” 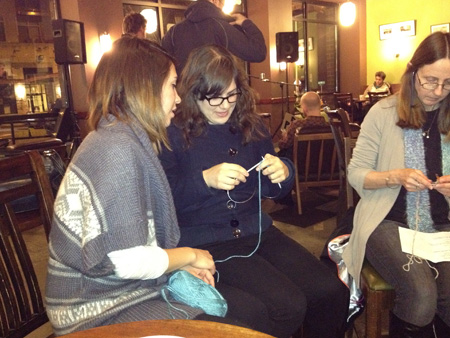 Kara Barnes, a UW student, is teaching her cousin how to knit.

It also gives younger individuals something to do as well. Kara Barnes, a student at the University of Washington, decided to get involved after her brother encouraged her to give the money she would have spent on his Christmas present to his girlfriend’s nonprofit organization. The knitting club was a good opportunity for her to continue giving back to the community because she already knew a few of her co-workers who participated. It made her feel good and she thought, “Why not make it a habit?”

Grage alone is one of the more experienced knitters, often spending more time helping others learn from their mistakes instead of working on her own project. She learned at the age of 5 from her mother who would fix her mistakes – that is, until her siblings were born. Grage said her mother turned to her and said, “You’ll have to fix your own mistakes now.”

Her participation in various organizations ranging from the Green Party on a local, state, and national level, to working with the Scandinavian community established in Ballard, required that she attend various meetings and she needed to do something with her hands. “There is a real need to do mindless things when you’re in a meeting and you have to pay attention,” she said. “Yarn seems to accumulate when you’re not looking so it is good to have some uses for it.”

Now retired, she still participates in Sustainable Ballard and is currently involved in community planning for the Nyer Urness House, a project of the Compass Housing Alliance and a halfway home for the homeless to get back on their feet. Grage hopes that once the house is up and running, her group of knitters will be able to donate directly to the people in the home. “It’s really quite satisfying seeing a homeless person wearing a scarf you knit,” Grage said. 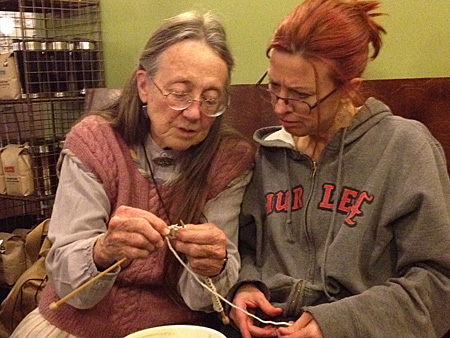 Leslie Craddock, a Ballard resident since 1999, is learning how to knit and attended two knitting meetings already. She sat next to Grage at the meeting in case she messed up on her stitching, but enjoys doing something built out of sincerity for someone less fortunate. “This is such a giving group of people,” Craddock said. “Just the kind of people who you want in Ballard.”

(Contributor Mary Jean Spadafora is a student in the University of Washington Department of Communication News Laboratory.)