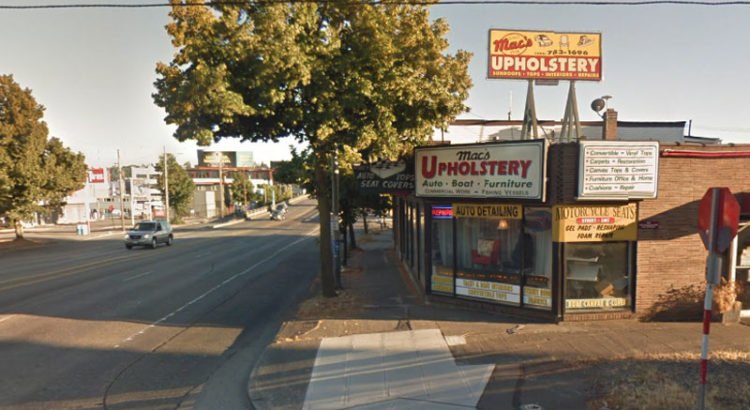 Ballard continues to attract high-density developments, and the latest proposal is for 150 “small efficiency dwelling units” in a new apartment along 15th Ave. at 51st St.

The development is slated for the site currently leased by Mac’s Upholstery, a small business operating in Ballard for the last 48 years. But Mac’s has a backup plan: the store will move a few blocks away to 46th St., right next door to Mac’s Canvas Shop, the company’s marine operation.

“I just bought [that property] a year and half ago,” owner Tony Mazzarella told My Ballard. “I got really lucky.”

Tony says the 15th Ave. store will remain open until 2021, and that should give him enough time to build the new store and move down to the 46th St. property. He said the 15th Ave. lot was too expensive to buy.

As for the new development, the proposal says it will not offer vehicular parking because it’s in a “parking flexibility area” — in part due to its proximity to mass transit — but will provide parking for bicycles “as required.”

“Where are people that work in Ballard supposed to park?” Tony asked, explaining that people from nearby apartments are trying to park in his parking lot. He said the surge in Ballard’s development over the last few years is “dominating small businesses.”

The proposal is still in its early phases, but given the zoning for the area, “a six- or seven-story building is likely,” reports the Daily Journal of Commerce.

At least they have frequent bus service there. Some parts of Ballard only have weekday buses into town in the morning, and only return to Ballard for afternoon rush hour. And nothing on the weekends, at night, or between the hours of 9 and 3-ish. I understand it costs too much to have bus service to NW Ballard, but every time I read about yet another tall building with tiny units and no parking, it makes me cringe.

““Where are people that work in Ballard supposed to park?” Tony asked”

Wait, is this the same guy who set up a sprinkler system on the EDGE of his property to spray water on a homeless person and their belongings who were in the right-of-way?

Is this guy actually complaining about parking when he ‘bought the property a year an a half ago’ and now is making an absolute killing developing it?

@Meredith We clarified the story a bit. He didn’t own or sell the 15th Ave. property, and he’s using the 46th St. property — which he recently bought — for his business.

don’t blame MACS…. blame the property owners that cashed out. THEN Blame the developers for NOT providing at least some minimal parking.

Merideth, I’ll have you know the idea of watering the homeless guy/ tweaker/drug addicts was My idea and what ended up being done was a much watered down version of what I wanted to do. Besides if anyone was around to see the unveiling they would have learned that no one was living there, it was just a tarp covering their chpp shop of stolen stuff, shopping carts, bicycles etc. So stop your complacency toward the continuing decimation of the city and remember that this didn’t used to happen and it doesn’t need to now! AlsoTony is a hell of a hard worker and is a lot nicer than I’d be if a addict/chop shop was next to my business. So before you call someone “a piece of garbage” you might want to know a few more facts!

BALLARDMIKE– why do we” blame” anyone? The land owner???? they are responding to the current market, plus taking the financial hit to help develop affordable housing (see City of Seattle’s per unit “fee/assesement” which will get passed onto the land owner’s cost of sale), the developer ???? they don’t determine # of parking spots that’s also up to the City.
I agree with your conclusion, Then VOTE!

Simple solution: The new mini-apartments without parking should only be rented to tenants without cars. If you have a car, you can’t rent one (unless you can certify your car is parked in some other off-street facility).

@Matt,
That’s kind of silly– so only people that already live here can park on the street? Why should they get to use the public right-of-way for free? How exactly would Cartogo or Reachnow rental cars have you ‘certify’ that your car is not parked on the street nearby?
Charge for all street parking– there’s your simple solution.

@Dale,
“My idea and what ended up being done was a much watered down version of what I wanted to do”
Is that some sort of sick joke? What were you hoping to do with that hose?
So, “it was just a tarp covering their chop shop of stolen stuff, shopping carts, bicycles etc.” makes it OK for you to be the one who decides that certain parts of our population deserve to have all their possessions soaked? How would you like if I knocked on your door then stood there with a fire hose when you opened it?
You are not the arbiter of how homeless should be treated and you might want to go stand out by the curb, because it is pick-up day

@ Meredith,
Who the F then IS the “Poobah” of homeless”? You? Well then, own them all and take them in. “Charge for off street parking”? Are you serious? Why not make these liberal do-gooders simply sign something stating “they will own NO autos”? Wouldn’t that be making a stand or be “progressive”? I just love the 3rd grade Michael Moore logic though. Some here say we “need to vote”. Um, for what, who? More leftists/progressives? LOL. Why I ask, is it easier to fool so many than it is making them believe they’ve BEEN fooled?

“Why not make these liberal do-gooders simply sign something stating ‘they will own NO autos’?”

So you want to discriminate who can live somewhere based on whether they own a car? You should stop, reread your comment and think about how moronic you sound. Maybe the shame you feel will give you the attitude adjustment you so desperately need.

We already have laws that limit pets in buildings or smoking or commercial or criminal activity. So adding auto-ownership isn’t a big deal. We should not be forced to provide parking on streets for the benefit of developers of buildings with no parking. Obviously, parking would still be there for deliveries and short term parking and Car2Go services, etc.

“We already have laws that limit… criminal activity, so adding auto-ownership isn’t a big deal”

Do you realize how ridiculous that sounds?

” We should not be forced to provide parking on streets for the benefit of developers of buildings with no parking.”

I agree. There shouldn’t be free parking on the street for anyone, regardless of when you moved here. If you can’t park your vehicle on property you own, then tough luck. I pay too much in taxes to just give this land away (and the same goes for the ‘free’ parking where the BG missing link trail should be).

These buildings without parking were permitted with the idea that they would appeal to younger tenants without cars, who use mass transit. In fact, many tenants of these buildings fit that bill. Fewer young city dwellers own cars. I’m just suggesting we make that idea official. This would prevent the impact new buildings have on street parking in surrounding communities.

Will someone think about the cars?

So who again gets to park on the street?

So Merideth, according to you free parking is no good but free camping and dumping garbage, needles human waste is okay with you? Take a look under the Ballard bridge on Leary way right now.

I don’t mind the tall buildings or the parking crunch, but i think it’s a bummer to depopulate the ground floors of neighborhoods by reducing storefront supply. I would like to see taller height limits and mandatory storefront inclusion at ground floors. From 9-5 every day u get sentinels invested in the good order of their neighborhoods, neighbors who r easier to get to know than fellow apartment residents