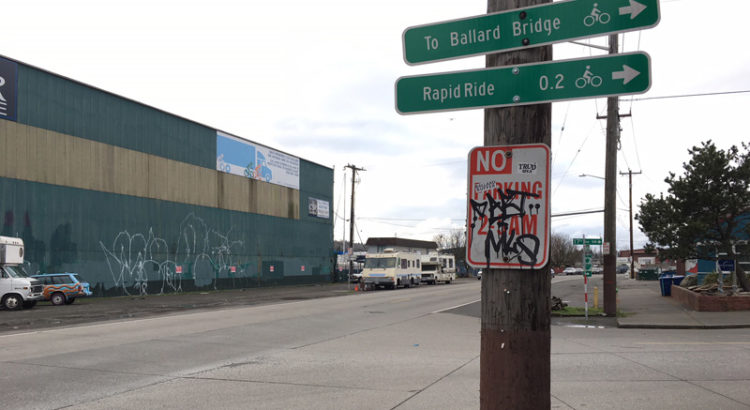 Ballard’s long-running battle over the Missing Link may be nearing a conclusion.

Last month the Seattle Hearing Examiner heard another appeal from the Ballard Coalition, a collection of businesses challenging SDOT’s environmental impact statement that clears the way for the trail to run along industrial Shilshole Ave. (above).

Last week attorneys for SDOT, Cascade Bicycle Club and the Ballard Coalition filed their “response briefs”, setting the stage for the Hearing Examiner’s decision. (You can read all the filings here).

Then this Wednesday, Councilmember Mike O’Brien and representatives from Cascade Bicycle Club and other groups are holding an event “to show our new mayor, Jenny Durkan, our support and commitment to breaking ground on the Missing Link of the Burke-Gilman Trail in 2018.”

The event at Peddler Brewing will feature “the original organizers who 50 years ago took action to build the Burke-Gilman Trail,” the invite explains. It will run from 5:30 to 7:30 p.m. For its part, the Ballard Coalition is pushing for the trail to travel up Leary to Market St., avoiding the industrial area. During the hearing, the Coalition argued that SDOT’s final environmental impact statement (FEIS) overlooked the dangers of a path that crosses “55 industrial driveways and intersections in just 1.5 miles.” In its post-hearing brief, the Coalition claimed “SDOT repeatedly directed its consultants to downplay the environmental impacts of its proposal.”

SDOT argued it “completed a thorough and comprehensive environmental analysis”, and in a filing after the hearing, stated “the Coalition has not met its heavy burden to sustain its challenge.”

Now the decision rests with the Hearing Examiner. We’ll keep you updated…

I hope an RV door swings open and knocks O’Brien right off his bike. That said, I’m pretty agnostic about the route this thing takes.

Leary and Market are more dangerous alternatives. That is why the cyclists are already traveling the Shilshole route.

@Kevin I tweaked it a bit, thank you.

I like how industry on Shilshole uses cyclists and safety as a scapegoat for their problems with overall development in Ballard while the VW’s, Subaru’s, and Audi’s that are actually causing the delays and congestion that impacts their business.

Since the Ballard Chamber is controlled by anti-transit advocates, highlighting car induced congestion wouldn’t be acceptable, but they can all agree that attacking cyclists will solve all the congestion issues in Ballard.

I look forward to biking 5mph in front of the next cement truck I see on Shilshole, in the name of safety, which they are so concerned with.

mikey will probably crash his bike into a bum tent and then blame/sue the city.

I love the comments about the RV door! Keep up the good work everyone. In case anyone is confused, bicycles are already using the road constantly. Let’s give them a safe place to ride. You industrial folks need to get real and recognize bicycles are here to stay. Stop delaying the inevitable. The free parking creates an enormous amount of traffic and safety hazards. I would much rather the free parking goes to a much more useful resource such as the Burke continuation. All of you that reject the Burke extension should be slapped right across your face….while a cyclist watches

I am tired of the Ballard Chamber of Commerce and their scare and intimidation tactics. If you need Sand or Gravel for your home go to Sky Nursery: its much cheaper and you support a local business serving the North End for over 60 years. When Salmon Bay Sand and Gravel get out of the way of progress and the inevitable is when I will consider giving my business to them again.

For the record, Ballard Chamber (now Ballard Alliance), did not sign on to the most recent legal action. Don’t know if SBSG is a paying member of the Alliance, but their sentiments are pretty clear – NIMBY. Also, Mike Stewart of Ballard Alliance has been a member of the Design Advisory Committee, whose work is nearly complete. By early to mid -February, SDOT should be ready to put the design out to bid. The $$ is in hand. Legal challenges remain and convincing those litigants to cease and desist should be the goal. SDOT has done a driveway by driveway analysis of the entire route, and this project will provide considerable benefit to everyone in the corridor: safer crossings of driveways, safer pedestrian crossings of Shilsole, new traffic signals prioritizing freight. The time has come to get it done.

John, for the record, you should receive a boot planted right between your uprights, while the rest of us watch.

Too bad cyclists are associated with dimwit poverty pimp/antisocial behavior apologist Mike O’Brien.
Big picture: all those nice bikes you see the junkies riding in the wrong gear while wearing jeans are STOLEN and get piled up next to the (should be) illegal camps everywhere. I’m neutral on the Missing Link, especially since the city has allowed the stretch of trail through from Ballard to Fremont to turn into a disgusting corridor of human failure with the added bonus of the occasional attempted murder.

@Access: Dude, Weatbrook lost. Get over it. Don’t you have some homeless people to spy on from the bushes?

That huge banner that CSR Marine put up is a picture of the current situation: bikes sharing the lanes of Shilshole with trucks.

By fighting the Shilshole route, what they’re saying is they want that awful, dangerous situation to continue.

Sure, let’s just convince more businesses to move out of Seattle and pink slip their employees so a bunch of MAMIL’s can have their little bike trail.

@ Hayduke —– I fail to see how having 1 in 3 of cement deliveries having to wait a minute and a half for a jogger or a bicyclist to clear the path will lead to the business failing. The cement deliveries take a couple hours, say 120 minutes. So if it takes them 1.5 minutes to wait, that’s what 1.5/120 an increase of 1.25%. It won’t even be every entry and exit, so its at best a 1% increase in labor costs. What business is going to go under with a 1% increase to labor costs? SBSG should be doing very well with the increased traffic congestion around the Seattle area, as their competitors face even longer traffic delays having to drive from further away compared to centralized Ballard. If the real issue is about parking, why do those businesses get free parking on city of Seattle owned land, and virtually everywhere else in Seattle doesn’t? Nearly every other business in downtown Ballard has their employees and customers search and pay for parking. Why should a common good (the city owned land) be provided for the profit of a select few families that own those businesses but not others?… Read more »